There can be only one. Connor MacLeod is living in 1980s America as Russell Nash but he has lived many lives before this. He has just killed a man with a samurai sword. He took off his head and ran into the arms of the police. He is a Highlander, that is a strange creature of myth and history. They are an ancient collection of warriors who have been sent to live down the ages until they prove either they are the best or die trying. They may have been many people but they are always escaping from those others out to get them. They need to kill and kill again, until they get to the final one. The true Highlander… 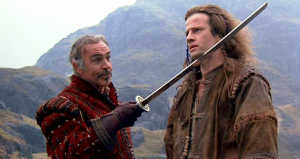 This slice of 80s makes me remember my childhood. When I saw this on VHS, it looked a lot worse but was still excellent fun. Then I showed it to my brother and mother, they both liked it but my mum was a little hostile to its by numbers script. I remember arguing that it is a classical action adventure and if shown to a wide audience, they will be engaged and energised. They will love a film that is again pure cinema. It has a simple enough story, well written, plays to the cast and directors strengths. It has good compositions, set design, flair for action and chemistry. From the director of Razorback it is a remarkable piece of film. Strutting and solid in stance and tone.

Has it dated? Yes in some ways it feels a little dated then it did when I saw it 5 years back. It has silly hair, score which has not aged well and the transfer highlights its failings and an occasional silly use of 80s visual effects that need updating and remixing. A redo for the whole is worthwhile. The deleted scenes as well make a case for this. This all said I have to say it is overall brilliant if you have never seen it, do so. If you have then stick with your previous copy. 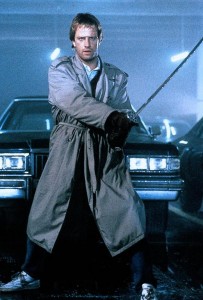 So to the DVD. It is over 2 discs and the first one stand out is the film. The interviews add nothing. The 4 part making of is okay but I think it would have been rewarding over 2 parts. The commentary by Mulcahy is compelling.