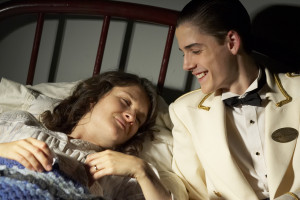 Young boys often live in a dream like state of desire, derision and disgust. This is often brought about by being stuck in the wrong place or living with the wrong people. Here we have a young dreamer living during World War II named Terry. He lives in some dreary place in the US that is far away from being his idea of the right place. The right place would be Gander in Newfoundland. There is where movie stars and Hollywood types spend their days crossing over the Atlantic to entertain the boys freeing Europe from the clutches of the iron cross and Hitler. When his neighbour tells him that he could get a job there he gets excited but he knows that a problem is very real and can stop his dream. Violet his mother is diagnosed with  diphtheria. He loves his mum and they love sharing stories of famous people and worlds away from where they are….

Ok it is twee and dull. It is empty and vanilla (DVD as well as film). It holds little to the great film stars and films it talks so lovingly about. The look is of a soap from the 80s that is so bad as to have be relegated to a channel on an international channel and sold as quality films for the less than sophisticated.  It makes you cringe a bit, laugh at it a lot and feel annoyed with it often. It is also worth a little watch. If it had more money, a better cast and a more toned and clever script it could have been something. It could have been a delight of epic proportions. It could have said something new and fresh. Given ideas to others to make great film leaps in style and soundscape. Homage and histrionics are great things in the right hands, so is craft and skill, touch and talent…Here we only have a could have been and nothing more….sadly.