Based on the novel of the same name, Hammett tells the story of crime writer Dashiell Hammett involved in the investigation of a mysterious disappearance in San Francisco. Francis Ford Coppola hired Wim Wenders to direct the film. However, when it was completed, the studio was so dissatisfied that only a small amount of Wenders’ footage remains in the final cut, and the rest was completely reshot by Coppola. The significance of Coppola’s involvement is shown by the ‘Francis Ford Coppola presents’ so intentionally placed before the titles. The lead role as Dashiell Hammett was also given to a star of Coppola’s masterpiece ‘Apocalypse Now’, Frederic Forrest. So it really is a Coppola production in every aspect. 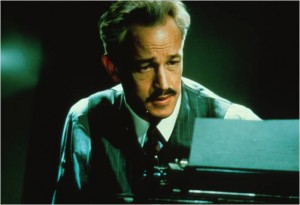 The film is completely fictional but plays out as homage to Hammett’s work, which includes the classic crime stories ‘The Maltese Falcon’ and ‘The Thin Man’. The tribute to noir is very creditable; with the use of venetian blinds, shadow, suspicious figures and concealed handguns. The smooth jazz soundtrack used throughout also sets the scene perfectly and creates the right atmosphere for a story on Hammett’s influence for writing his crime novels. By neatly complimenting classic crime thrillers, Hammett sadly offers no fresh material or a new perspective; it simply acts as a slice of noir. This approach just creates a longing to revisit Hammett’s real classics such as ‘The Maltese Falcon’, which is much more satisfying to watch.

Forrest seems like the right choice for the lead role. He plays the straight-faced Hammett well, while also showing glints of the underlying emotion and morality of a protagonist living in a world of corruption. The supporting cast are neither here nor there but the wonderful surprise appearance from Jack Nance was enjoyable on a personal level (David Lynch’s ‘Eraserhead’ featuring Nance in a lead role being a favourite of mine). Apart from Forrest and Nance’s characters, the rest are forgettable and do not stand out as individuals like those in Hammett’s actual work. At times it becomes clear that Hammett just isn’t as cool as characters like The Maltese Falcon’s Sam Spade – flawlessly played by Humphrey Bogart in the film adaptation. Hammett is similar to Spade in his way with the ladies and there are many references to the novel; a standout example being the shot of a falcon statuette in one scene.

Hammett is an exploration of noir that compliments his real life novels and their film adaptations. However, the visually satisfying scenes fail to make up for the disengaging storyline and uninteresting characters. Avid film fans will be interested to see the references to Hammett’s work. The use of hats, cigarettes and chiaroscuro shows both Wenders’ and Coppola’s passion for the noir and crime genres. They succeeded in making Hammett mesmerising but the overly intricate plot and lack of new material makes it seem at times like a poor version of David Cronenberg’s ‘Naked Lunch’.