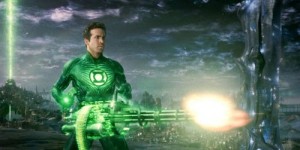 Green Lantern (Martin Campbell) is a film which is all surface and no depth, its redeeming quality is its spectacular effects and some criminally underused characters.

Green Lantern is an origin story for the titular hero, whose alter-ego is Hal Jordan (Ryan Reynolds), after a mysterious alien known as Abin Sur (Temuera Morrison) crashes his power-ring finds Hal Jordan as his replacement. Jordan is then transported to the planet which is a base for the Green Lantern corps. Jordan must then fight an evil force known as Paralax to save both Earth and the Universe.

The first point to make is that the special effects in this movie are undeniably incredible, the CGI worlds and creatures have clearly had painstaking craft and exceptional attention to detail, the space landscapes of Oa and the planet Paralax was discovered on look incredibly beautiful and are highlights of the film.
Unfortunately that is where the majority of the positives end, the characters are laughibly underdeveloped, and the few interesting characters; Mark Strong’s Synestro and Peter Sarsgaard’s Hector Hammond are criminally underused, but Michael Clark Duncan’s turn as Kilowog was refreshing and his brief spell in the film made him interesting character who was used the right amount. Unfortunately the two leads, Ryan Reynolds as the Green Lantern and Blake Lively as his love interest Carol Ferris, are playing characters massively underdeveloped and frankly dull, neither has any depth and there character traits feel like stock personalities. This leads to moments which are supposed to impact emotionally being long winded and dull. Perhaps the film could have gotten away with such poor characters by cutting half an hour out of the running time and leaving it as a pure action superhero movie solely reliant on effects. Ultimately the film suffers the same way many superhero movies do, trying to please the comics die-hard fans whilst also allowing average cinema goers to enjoy the film as well. When will Hollywood finally ask the writers of the comics themselves to write the screenplay.

Overall Green Lantern is a film which is all surface and no depth, its as if somebody bought a high quality wax to shine there car only to realise the car is mostly rust. The film has moments which make it worth watching if there is nothing else on, and the Blu-Ray edition only makes the already incredible effects all the more breathtaking.

Green Lantern is released on Blu-Ray and DVD on October 17th 2011.