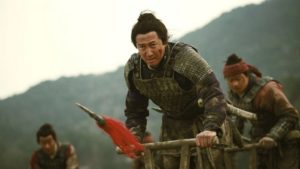 The battle against Japanese pirates sees General Qi Jiguang take the bold decision to enlist the help of younger warriors. These warriors are less battle experienced but are full of ideas. The Japanese pirates are stronger and mercilessly attack. Wave after wave they come and the new warriors have to repel these offensives. Can they hold on? Can they hold strong against an overwhelming and powerful enemy? Can they take the chance to make China better and make the glory of the day shine on? 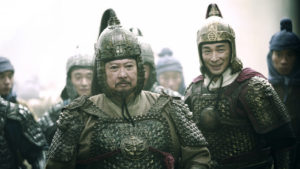 Let me get this straight. A Chinese propaganda film that is so deeply and unashamedly agenda driven that to anyone but the naive, it smacks of Han doctrine fundamentalism. I am a fan of Chinese cinema but this film must be seen for what it is. The action scenes are excellent, the fights spectacular but that story is so on the nose of what the state wants everyone to believe. One that China is a minority and fighting for its life. Two it must take on enemies like Japan for control and defence of its territory (read islands that are disputed here.)

Then third and final China must look to its past success to reveal the future ones. I for one am slightly perturbed by this. If not for the parallel. The descent in India to Hindu fundamentalism and the rise in the west of Nazi nationalism are bad. However if either of these countries produced an all out agenda film like this one they would be ripped apart and rightly so.