Barry Detweiler (‘Dutch’ to his friends) has flown all the way to Corfu. He is on a mission to find Fedora, the acting great and mystery that has left a shadow over the movie world since she suddenly stopped making films. He has no other options as the industry has largely forgotten him and is washed up. The problem is that the elusive Fedora is living on an island that is away from it all, deserted from anything else but her close cabal of helpers. Detweiler is not going to be distracted however and he sets about crossing the lake to the island and getting to the elusive lady in question. When this fails, providence shines a light on him and he has the chance to speak to her directly as she shops at a local shop and interacts with people outside of her island silence. The problem is that this might just be the start of a strange journey into the horrors of fame and seclusion. 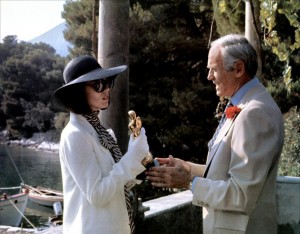 Wilder made some of the greatest films of his or any filmmaking generation. Filled with sardonic wit, slicing satire and capturing the people he loved, Hollywood types.  An oscar winner and awarded with a multitude of backslaps, he often saw these as the stink that might not have washed off. He directed with skill, grace and an edge that punched. Fedora still has his cutting bite but lacks the savage punch that defined his earlier films. This is a rough satire on Hollywood but also an exploration on another theme he loved, fame. It plays on how we the viewer use fame and how the famous have to live within it. Fame is a vicious game that is kind to those entering it and awful to everyone inside it but seems to be unprepared to let anyone leave it. This film is about the entering and leaving, it leaves off the pain of the middle part in that it wants to speak to the audience about the tidal movements of money and desire. Holden is the draw to this film as he has a gentle, kind and complex touch to his personality. He avoids the hard and ruthless previously seen in his Wilder work and instead plays to the charms he has in his head and heart. The other cast members are melodramatic and often play to the shifting tones of the film but this is not unattractive, it is more intelligent. 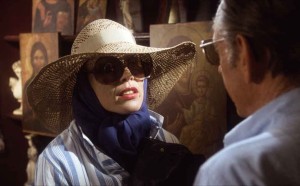 The Blu ray is a oddity. It has a great transfer that might be the best yet of this film. Check out the restoration details that allow for the viewer to see the work involved. The deleted scenes are a joy and add much to the way we see the film and the story. I would say if you delight in the film please look out for this. It is amazing.