Extremely Loud & Incredibly Close is the tragic story of a young boy called Oskar who suffers from Asperger’s syndrome. After his father, played by Tom Hanks, is killed in the 9/11 attacks Oskar finds a key and goes on an adventure to try and locate where the lock is. He uses the expedition as a way to try and still connect with his father who, when he was alive, had created adventures for the boy to go on to learn to socialise. 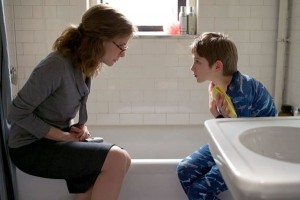 The film is a great study of family relations and how Oskar’s grandparents and parents deal with his condition and help him approach various situations. The focus of the film is on Oskar’s condition and not the 9/11 attacks which seems to have been misunderstood by the many of the film’s critics. ‘The Worst Day’, as Oskar calls it, is used as the basis of the film to add emotion but it is never exploited, it is simply used as an event that Oskar finds it hard to comes to terms with because of his condition. Extremely Loud & Incredibly Close is a well made film which is both intriguing and dramatic but not pretentious. Not only does the film focus on Oskar’s problems, but also the problems of the people he meets on his travels, in a similar way to Synecdoche, New York. There are also similarities with The Tree of Life in the way young Oskar reminisces about the previous expeditions he had completed with his father.

There is an underlying innocence to the film, even though there are references to such a horrific event; Oskar’s perspective means he uses the situation to help motivate his expedition. His perspective makes the film more interesting as we see how he reacts to certain situations and how others try to push him out of his comfort zone. There are many beautiful shots which we made for high definition and the cinematography is excellent. The great performances from Max von Sydow and Sandra Bullock as well as that from Thomas Horn who plays the young boy also help give the film some credibility.

Despite being nominated for Best Picture, Extremely Loud & Incredibly Close has received a lot of undeserved criticism due to its subject matter. It is a film which does try to provoke strong reactions which can lead to a variety of different opinions. However, the focus on 9/11 is done in the best way possible – through the eyes of a child who tries desperately to find some meaning without the presence of his father.