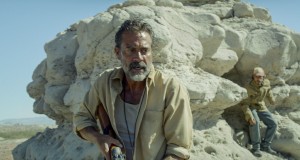 The crisis in Calais, as our eyes have been exposed to startling footage of refugees and migrants looking to flee through any means of transport. People from diverse backgrounds and of various ethnic groups across Continental Europe now based in the UK, fearing for their futures in the wake of Brexit as the uncertainty grows. A country torn apart and on the brink of naming its next President after a toxic and twisted campaign, with the wretched rhetoric of one candidate suggesting the building of an impenetrable wall would be paid for by its neighbour. Starved of a big-screen release here in the UK, director Jonas Cuaron couldn’t have anticipated the social and emotional resonance that now engulfs his directorial debut.

Son of the well-renowned Alfonso Cuaron (Gravity/Children of Men), Jonas’ ‘Desierto’ begins with a gorgeous landscape shot across the treacherous border that separates the US and Mexico, jarring in the sense of dread that is instilled within the opening frames. As the sun rises, so do the hopes and ambitions of a tight-knit group of Mexican immigrants led by Gael Garcia Bernal’s disheveled Moises, whom all desperately seek a better life as they travel across the desolated desert.

Often filmed in extreme long shots in the film’s early infancy, accentuating the anonymity the protagonists crave, they are soon besieged by a remorseless American ‘lone wolf’ in the form of Jeffrey Dean Morgan’s Sam. A callous and cynical individual armed with a rifle and the grizzly temperament of his German Shepherd, he looks to take the law into his own hands, triggering a ferocious battle of wits in the sweltering heat.

Anchored by a pulse-pounding score from Woodkid, with the haunting cinematic quality of his music encapsulated perfectly by the signature track ‘Land Of All’, the lean and mean narrative structure along with the harsh backdrop of ‘Desierto’ resembles a tightly confined horror film. Clocking in at 84 minutes long and thriving off the unnerving nature of its visual motifs, Cuaron creates a timely and tense atmosphere as the distance between its figures mirrors the framing, gradually resorting to stifling close-ups as we witness the anguish and fear etched across Sam and Moises’ faces particularly. 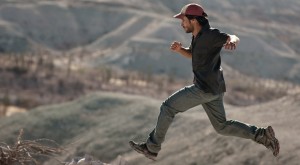 Its swift acts of brutality clinical and the far from traditional setting unforgiving. To imply Desierto is a really insightful and incisive look at immigration and border control however, would be somewhat misjudged. Whilst its intentions are honourable, Cuaron’s reliance on certain genre tropes renders the film to be lacking in subtlety, further hindered by the sketchy character development.

The committed performances of Jeffrey Dean Morgan’s Sam and Gael Garcia Bernal’s Moises engage immensely as they navigate through the treacherous terrain, but as a viewer we’re often restricted to hateful and sarcastic soundbites (Welcome to the land of the free!) and an oversimplification of their backstories to drive home its intended message.

As a lofty cinematic piece about the poisonous policies that have fed into the political landscape, it doesn’t quite get over the line. Yet taken as a straight-up, unrelenting cautionary tale, Desierto is a supremely effective and often thrilling debut by Jonas Cuaron.