What Have You Done To Solange Blu-Ray Review 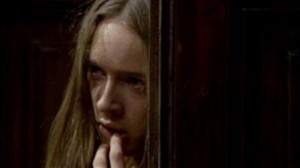 A student is having an affair with a married teacher from her catholic school. They spend an afternoon together on a boat on the river Thames. drifting along the tide. She witnesses a man chasing a woman, a knife, the flash of the blade. He feels she is inventing a story to stop him from having her. She recalls the incident and then they split up and go home. The next morning a murder is uncovered on the river banks. A woman has been stabbed to death. Now the school is under suspicion and the body was of a pupil. Left with a knife in her groin and as more bodies begin to pile up and the original witness is murdered after she reveals she saw a man in a habit,questions are asked as to what links the school and its priest to the crimes and who is Solange and what have they done to her?

Delighted by a Giallo is a rare thing in my current state. I have a wealth of lovely friends who watch amazing and terrible films and discuss how we have interacted with them. Often with Giallos we come out being unsatisifed because we have seen so many of them. They are often littered with plot devices and conform to conventions that have grown thin and lazy. Solange is not one of those. It is a delight and one that can really be gotten into for the film as analytical tool, form developer or as a casual watch. This has so much in its content as to be a film worthy of review and re-review. I will analyse it below and if you want to go there please read the next paragraph, if not and you want to know about how superb the blu ray / dvd is then read the next paragraph!

So what is it all about? Well I saw it as two very distinct things at play here. The fear of sex and sexuality. The use of a knife to the genitals is a little obvious in the expression of the fear of the act of sex. Knife is a penis and we get the killer uses it to dispatch victims in a sexualised way. This was why the film suffered for so many years at the censors hands. The thing is that it is all on young woman and they are all virgins. It reverses that classic ideas of what happens when you have sex. The conventions are overturned here and it is not for me to say but reflect on it when you finish the film. Think also of the use of the weapon and on who. You see all those that have lesbian tendancy toward other girls are also in the firing line and are often strong but defeminised woman.  Put simply they are alpha male types….

The new 2k restoration is sublime and it is far superior to anything released previously. Clean and free from wear of grime. A Joy. The choice of language is a great bonus in the sense that you have the original version and the Solange dubbed piece that is very quick to access. The commentary is brill and from two great voices, Kim Newman, who has great things to say and does so with clear and clever wit. The docs are all superb and make you want to see the rest of the so called trilogy. 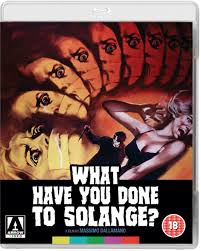