Seijun Suzuki has seen a renaissance via both Arrow and the amazing Jasper Sharp. This is an action packed cops on a mission film that inspired almost any film you love from the 1980s! When gang warfare leads to stolen guns from an army shipment, Police detective Tajima (Joe Shishido) is given the dubious task of tracking them down. As he investigates, so head are crushed and questions are asked with fists. These actions bring to ahead the simmering underworld grudge and violence spews into a blood-bath.

Arrow often delight us with releases. Their Japanese release have been literally astonishing in many fronts. The films by Suzuki have actually been on another plain however and Detective Bureau 2-3 : Go To Hell Bastards is right up there with the best work they have ever done. 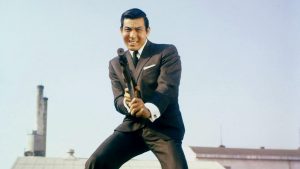 Its a send up and it verges on parody sometimes. Its tongue in cheek and absurdly harsh on American culture and colonial representations but its also hard, fast and bullets fly. Its engrossing and could be taken almost seriously. Often the action scenes have little restraint and some even have almost sensual overtones. That is to suggest they are more than just gun play…