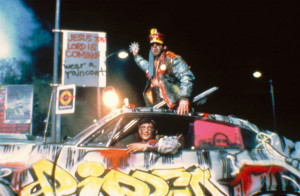 Jimmy (nickname Crabs) has to navigate the near future filled with rampaging gangs, violence and car crashes. He lives with his uncle in a dead end town making money form the shells of car carnage but only when they can fight off the poachers. No fun can be had in the real world and so he has to turn to the reel world for his source of entertainment. The local drive provides provides excitement and action but it too has its pitfalls. Mainly the problem of getting out. You see once you are inside its walls the chance of escape is next to impossible. 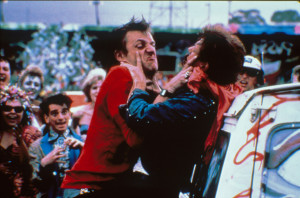 I remember when I was producing Moviedrome. The rebooted series was my attempt at getting great films into the world of modern bland cinematic discourse. Fuck superhero films with the empty headed, god obsession. Long live the films that ask us questions and make us squirm but do so with entertainment at their heart. This film is an incendiary mix of political, social and cultural commentary. It has views on immigration, integration and isolation that is as relevant now as it was then. The kick ass lead is a study in the angry young man post modern take and the visual delights of day glo, stay with you when you blink.

So to the discs and as some will know this has already been out and about before. That time it was as close to vanilla as possible, this time it is bells and whistles greatness galore. The commentary by Smith is great and worth a visit for his personal tit bits. His shorts are also fun and the restoration looks sharp but the previous versions was grand.