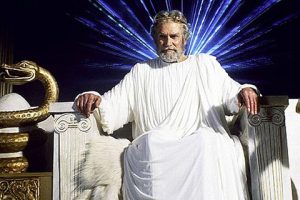 An amazing translation of a classic Greek Myth, combine stunning model work with over blown acting to full effect. Perseus (Harry Hamlin) is the mortal son of Zeus (Lawrence Olivier). He lives an idyllic life on a isolated island. When Thetis (Maggie Smith) seeks revenge on Zeus for deforming her son Calibos (Neil McCarthy), she transports him far away and to great danger. Zeus is a mean spirited leader of the gods.  He is also very loving to his son. So he does all in his powers to help Perseus fight against the monsters unleashed. From Medusa to the dreaded Kraken. 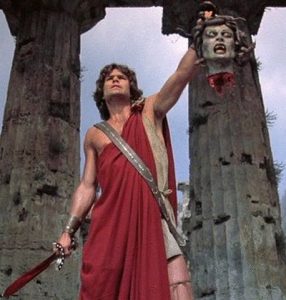 Childhood film memories are sometimes a wonderful thing. They can conjure up great events and visions that stayed with you long after. They can also be far more difficult. Either fooling you into remembering something was so better than it was or worse, terrible. In Clash of the Titans, I was convinced that it was going to be the later but happy to say it wasn’t either of these. It was the former, former. That is it was brilliant. Thrilling, funny, action packed and so over acted to be a joyous spread of theatricals. 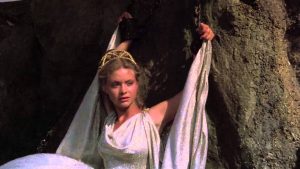 From the out set you have the myth running almost parallel with the screen story. You have Pegasus and the Kraken. Imagined with outlandish mysteriousness by the brilliant Ray Harryhausen. Then you have the bizarre Calibos, which McCarthy gives a screen stealing performance as the nasty mean creature of myth. 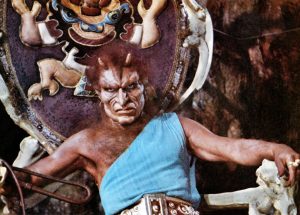 When you get to the gods, you get fine actors hamming the roles up for every cent. Boastful and brash Zeus.  Cunning and cruel Thetis. Interspersed with great sets and silly light shows. All this comes off around the lead Harry Hamlin. An actor of little range, Adonis features and a hardened body. In truth you do not watch for any of this. Its all the utterly magic puppet work that is trans-formative. It proves that these films and the work of Harryhausen was so exemplary, so unique. It must be celebrated and with as much gusto as possible. 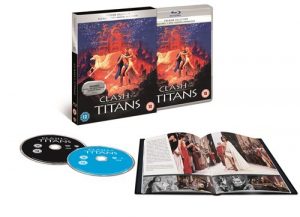 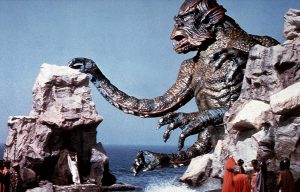 The Blu Ray is standard 1080 HD transfer and it is little different in comparison to the DVD bar nicer light levels on  the effect scenes. Underground Medusa lair is the most obvious moment it comes into its own.  The booklet inside the disc is nice. The conversation with the master is the starting point however. That is the money there.