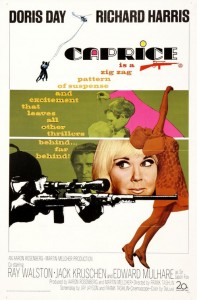 Charming but inconsistent, Caprice is an entertaining spy-spoof which tries desperately to be akin to Charade. Sadly, due to miscasting the lead roles and the wearisome plot, this romantic comedy falls short of its aspirations.

The narrative follows Doris Day’s undercover spy, Patricia Fowler, as she works for a new cosmetics company. Her mission is to attain the ingredients for a competitor’s new hair product, although she soon discovers that the company is selling much more than just toiletries.

Caprice is one of Doris Day’s final film roles and sadly is not one of her best. None of her comedic ability is on show apart from a few brief fleeting moments. This is a shame as the role on paper would seem perfect for her. Similarly Richard Harris delivers a weak comedic performance as a fellow spy who is little more than a cockney version of James Bond. The lack of chemistry between the two leads is perhaps why many of the comic moments do not pay off and more importantly why the romantic elements of the narrative seem so out of place.

The plot itself is heavily convoluted and by the end it is difficult to grasp exactly what is going on and who is spying for whom. This is perhaps the film’s biggest flaw and the numerous double-crossings and reveals in the last 20 minutes add little but to distract the viewer. There is also very little continuity in the story, leaving much unexplained by the final credits. 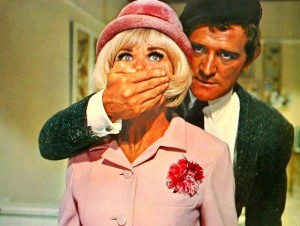 Despite this there is much to be enjoyed. The premise is extremely novel for the time, and perhaps the subtle digs on the cosmetic industry are more relevant today than they were in the 60s. Watching Day continually outwit her male equivalent in the shape of Harris is also a joy and the basis for many of the most memorable scenes, including a surveillance operation in a cafe which goes terrible wrong.

There are no extras on the DVD version or Subtitles, just the film in its original version.

Caprice is certainly flawed thanks to its miscasting of the two leads as an onscreen couple and an irresolute plot. However looking past these issues there is a light hearted spy caper underneath to be enjoyed which should appeal to any fans of Day.