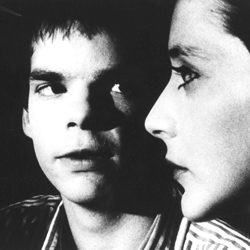 There are at least two good reasons to seek out Leos Carax’s first two films: the director’s use of music, and the performances of his lead actor Denis Lavant.

The two combine to powerful effect in 1986’s Mauvais Sang (also known as The Night Is Young), with Lavant’s extraordinary physicality providing the film’s most memorable moment: arms flailing as he inelegantly staggers/dances/sprints down the road to David Bowie’s Modern Love, he brings to mind his performance in the exhilarating accordion interlude from Carax’s most recent film, the masterful Holy Motors.

That 2012 feature puts Lavant’s versatile body to superb use throughout, and there are parallels with its surrealism as Alex wanders the streets in Boy Meets Girl (1984): he throws coins at the feet of a young couple kissing as they spin to Bowie’s When I Live My Dream, as if in a music video, and wanders off, eyes closed, as we cut to another character, Mireille (Mireille Perrier), dancing in her apartment.

In a recent – and rare – interview, Carax describes the two films as ‘love letters to cinema’ and in both Lavant essentially plays a stand-in for his director. In both the leads are named Alex – Carax’s real name – and in Boy Meets Girl, at least, it is unclear how seriously Carax, who also do takes himself. Primarily occupied with love, with death not far behind, wannabe film-maker Alex espouses adolescent philosophy and well-worn wisdom – ‘love is as old as the hills’ – while later dismissing his monologues as ‘mental diarrhoea’ and wishing he could escape them. 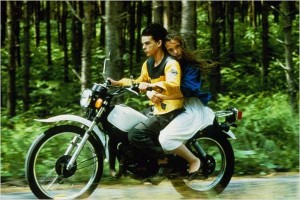 This debut, in black and white, looks fantastic. Shot by Jean Yves-Escoffier –  also the cinematographer on Mauvais Sang and Carax’s third film, Les amants du Pont-neuf – it tells the story of Alex falling in love with Mireille, who like him is not long out of a relationship. ‘I dream up titles for the films I plan to make,’ he says to her as Carax treads a path from enigmatic character study to near-melodrama.

Mauvais Sang is similarly unclassifiable because it refuses to settle on one genre: part crime film, part thriller, part romance. Alex is breaking up with Lise (Julie Delpy) and falls in love with Anna (Juliette Binoche), as he is planning a theft with her partner. By the end, after Alex, Anna and Lise are briefly reunited, Anna echoes Alex’s ungainly sprint to Benjamin Britten as the trio go their separate ways.

In this release by Artificial Eye, the Mauvais Sang disc contains more extras: a trailer, deleted scene and a 20-minute reel of rushes and out-takes. None are particularly notable. Boy Meets Girl includes a video of a young Denis Lavant offering – and often struggling to articulate – an interpretation of his character.