For his first film, Richard Jefferies worked on Writer and producer Nico Mastorakis BLOODTIDE.  Mastorakis was famous for Island of Death, The Zero Boys and others, saw the potential in a Greek set horror movie. Jefferies, who would work on a series of interesting films and even rewrite films like Tron Legacy, jumped at the chance to direct. Then see the talent that came on board. As is touted by the advertising team, Oscar winners James Earl Jones (He deserved one but was given an honorary nod), Jose Ferrer (who did win one competitivly for Cyrano de Bergerac in 1950) and Lila Kedrova ( she won for Zorba the Greek) it all builds for a rather interesting ride. 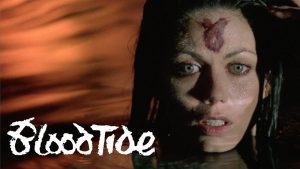 Neil Grice (Martin Kove ) and his wife Sherry (Mary Louise Weller) visit a Greek island to see a family member. There Frye (Jones) a diver and treasure hunter is plying his trade. He takes night time trips to the site of a ancient under water ruin. He accidentally exposes a temple which houses a monster from the deep to the world. This monster wants the flesh of virgins and the island is full of them! 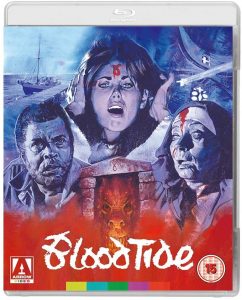 There is a sense, throughout many Greek Horror films submerged in the period of BLOODTIDE, that the world is under attack. The past is a dangerous place. The present is revolutionary. Sexual, satanic and sun drenched. Maybe reflective of the unhappy marriage of legend and the empires of a former civilisation, the films of the period delight in anger and locals calling time on the present. BLOODTIDE is no exception but it is more. A subtle and clever horror film that has riffed off of Hollywood blockbusters and classics. Well directed, filmed and edited. Now with a cast as it has, you expect this. But the whole works together into a demonically disturbed feast. Think RAWHEAD REX but not terrible. It also tops out the other films of the period, which are on the whole awful (Video nasty ISLAND OF DEATH being a perverse fave). 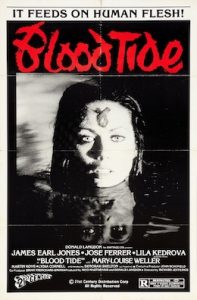 The public domain versions (which should not have been) have been exorcised and the version on our screens is a 4K scan that makes the bright light tame and the dark, black. The sea has depth and the soft focus faces can be seen, clear as day. We knew it would be so and it is very good.

Richard Jefferies commentary is the highlight of an otherwise unbalanced disc. Jefferies dilutes his style and direction. He talks frame, scene and build up. Film makers would benefit from a listen. Fans probably only for the tidbbits. Nico says nothing and to be fair its not for him not wanting to. Its more the questions and the time.