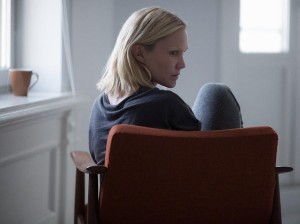 “I can still see in my dreams,” laments Ingrid (Ellen Dorrit Petersen). Recently afflicted by blindness, Ingrid experiences very little other than dreams and fantasies, too terrified to venture outside either alone or with her husband Morten (Henrik Rafaelsen). Eskil Vogt, directing his debut feature after building an international profile through co-writing credits on Joachim Trier’s Reprise and Oslo, August 31st, throws his audience into Ingrid’s increasingly paranoid mind, abusing the trust of first-person narration to make his film a bewildering treatise on cinematic fiction itself. 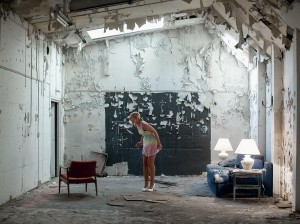 The porn is part of a story Ingrid is writing about a man called Einar (Marius Kolbenstvedt) and a woman called Elin (Vera Vitali) – a story which, as Ingrid becomes more estranged from her husband and more consumed with her paranoia over their life together, becomes even more coloured by reality. Which, naturally, in turn blurs the audience’s sense of this cinematic reality altogether. Vogt achieves this in a brilliantly ironic manner: he shows it to us, belying the expectations for a film about a blind woman. Within contained scenes, locations start to switch before our eyes, actors suddenly replace one another, and Ingrid’s imagination is as fully realised to our eyes as the actual reality of the world. If, of course, we can even trust that reality.

Petersen’s performance is quiet and introverted, but absolutely enigmatic: she never seems to be acting the blindness, refusing to draw attention to her face, helped by Vogt focusing the attention on the relationship of Ingrid to the space of her apartment. Even the most mundane tasks are rife with dangers because Ingrid hasn’t learnt how to navigate spaces without relying on her sight. In these most ordinary moments, her plight is absolutely sympathetic. 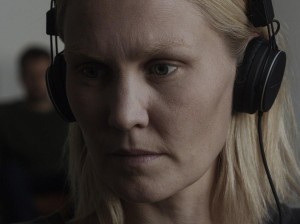 As is her sexual paranoia, because women are forced to examine their bodies and potential allure on a daily basis. “I no longer know how I look,” realises Ingrid, suddenly forced to abandon this self-examination – meaning that her mind obsesses over it, expecting that her husband will move on, is moving on, even when sat right next to her in bed. Elin, the woman within the story, becomes a cracked reflection for Ingrid’s self-hatred, shaming herself by embarrassing Elin, particularly in a cruelly amusing scene where she reads out her text messages on a bus.

Blind doesn’t necessarily leave us with the idea that Ingrid’s sexual self-image will define her and consume her – its final note is an unexpected one that reads as a bitter kind of triumph. Either way, Vogt’s deft exploration of society’s current concerns of self-expression and self-reflection, broadcast to the world at large, is a purer kind of victory: that of an auteur finding an independent voice and acing it straight off the bat.

Blind is available on DVD, Blu-ray and VOD now.