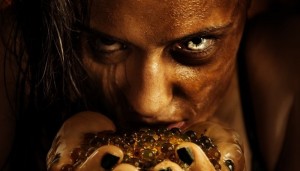 When on a trip to a foreign locale you are told the list of don’t does, most seem logical. Don’t drink the water, don’t have sex without contraception and do not go swimming in a secluded lake without an arsenal of weaponry. Casey and her friends decide to ignore this advice and swim in the lagoon of murky water and travelling folk paradise dreams. When Casey is bitten by an unseen yet nasty critter, she heads out of the water and back home. This begins the reasons for why it is unpleasant to ignore travelling without heeding some of the advice.

Body horror is a thing, yes. It was a thing way before this film and will be a thing after it too. It has masters of the form and even has movements and themes. Chad Archibald is almost riffing off its core texts when he films scenes from Bite. The film feels like we have seen it before and that is because we have. Often. The pus filled bites, the vomiting bug and caviar explosions of eggs. What we haven’t had before is Elma Begovic. 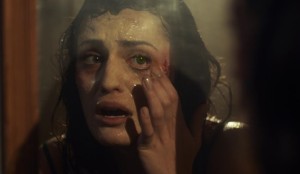 Dear Elma, you make the film far better than it deserved because you act with layers of emotional resonance. I compel you humble viewer, watch her act the room off of the other performances. She has range, gauge of the genre, personality and a little sexiness. She also has the grim creature thing down but builds it into a performance that is better and bigger than anything else. Hues of violent physical movement collide with passion and power. What’s the story about? Well its a dig at that nasty of things, the other. What’s its central theme, we are all paranoid about losing ourselves to that other. It could also be an analogy about capitalism and how we become the hunter of everyone to succeed. Dominate to up rate. Is it worth my time to sit and watch? Maybe.

The disc is empty of valuable content but looks good and sounds even better. Still wouldn’t pay £10 for it mind…