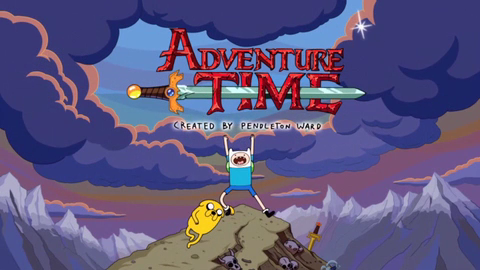 Spongebob Squarepants, that trailblazing TV show, found a cult audience among adults who saw past the brightly coloured facade of it being apparently aimed at kids, and realised that it was, in fact, a work of surreal, subversive genius, revelling in the absurd with all the panache and wit of a Terry Gilliam animation. A few kids TV shows have tried and failed to replicate that show’s magic, although one or two have struck a chord with discerning parents, such as Phineas and Ferb or Timmy Time. Now, however, Spongebob’s spiritual successor has truly arrived, and it is stranger, sillier and even less suitable for children than the porous sea creature’s odd adventures. It’s huge in the US and now Season 1 has arrived on DVD for us all to marvel at. It is, of course, Adventure Time.

The bonkers but brilliant show, devised by Pendleton Ward (who also voices one of the best supporting characters, Lumpy Space Princess), follows the escapades of Finn the human and Jake the magical dog who can change size and shape at will. They live in the magical land of Ooo which is broken down into various kingdoms made of candy, ice, clouds and many more. Jake and Finn roam the land looking for monsters to fight and people to save, all whilst making loud exclamations and telling silly jokes. It’s a hyperactive, ridiculous and nonsensical show and if this short précis has put you off, stop reading now, you won’t like this.

If, however, this sounds like it might be up your street, read on, for in its silliness it touches the sublime. Hand drawn animation is a rare gift these days, and in Adventure Time it allows for some truly bizarre, memorable images that wouldn’t happen if the show was created with homogeneous CG. It’s a brightly coloured, cartoonish world that never aims for realism but instead creates some striking, inventive imagery that shows creativity at every level of production. The absurdity of the plots lets the animators loose with their imaginations, and the result is crudely hypnotic.

Adventure Time’s fans, however, don’t come for the visuals, they come for the subversive humour, and it delivers in spades. From Japanese rainbow unicorns, to ice kings who re regularly naked, to magic men who just go around being jerks, this plays around with it’s fantastical setting so much that each episode is genuinely unpredictable and consistently hilarious. It’s difficult to know which children would enjoy this, but adult viewers who are fans of Terry Gilliam or A Town Called Panic will find a treasure trove of jokes and quotes that can be enjoyed on repeat. And as each story is only ten minutes long, it’s like a shot of hilarity that has addictive qualities, so it won’t be long before you are drunk silly on this show’s brilliance.

Adventure Time is out now