A Woman Under the Influence Blu-Ray Review 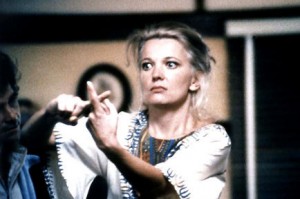 John Cassavetes’ A Woman Under the Influence is a character study of a mentally ill housewife called Mabel. The film plays out as a social pressure cooker which is both funny and hard to watch because of its rawness. Mabel’s erratic behaviour leads to a family breakdown which is explored in great depth through Cassavetes’ documentary-like style of filming. His use of close-ups and ability to squeeze the camera into small spaces creates a claustrophobic and uncomfortable feeling throughout which adds to the film’s focus on social interaction, social pressure and awkward situations. The film consists of a number of lengthy scenes which show the problems Mabel unintentionally causes for her family.

A Woman Under the Influence is an epic of madness. Not only does it drag on for a little too long but the snippets of music from Swan Lake played by Mabel throughout the film also create an underlying sense of greatness to Cassavetes’ work. There is a soul at the film’s core created by Gena Rowlands’ outstanding performance and her ability to create a mentally ill character that can really be sympathised with. There is a real tiredness and sadness in Rowlands’ eyes as she looks at other characters with a glazed-over stare. In one scene Mabel wanders the streets looking both lost and lonely as cars and people pass her by; scenes like this give the film a mesmerising quality. This, however, is not the case in every scene and some sequences do become a little uninteresting and dull.

Andrzej Zulawski’s Possession (1981) shares many similarities with this film but takes the concept and applies it to a more solid, but confusing, plot than this film does. However, Cassavetes’ work is renowned for being completely artistic and lacking a standard structure or purpose. He explores the boundaries of the acceptable and unacceptable in social interaction as Mabel is scolded for asking guests to dance and announcing to a table of family members that she wishes to go to bed with her husband. The camera lingers on Mabel as she contorts her face and body or walks around in the background talking to herself and looking disgruntled.

A Woman Under the Influence is both fantastic and hard to enjoy. Gena Rowlands makes the film and her performance is flawless. However, the other characters are unlikable and the lack of direction or point to the film does become a little tiring. As both an art film and a Cassavetes film it does its job and would be worth studying in detail. As a form of entertainment it is quite hard to connect with but still worth watching.