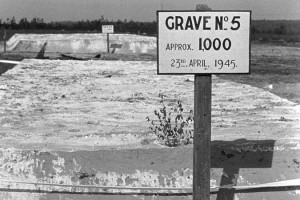 This is one of the most difficult films I’ve had to watch. Quite how difficult it would be I’m not sure anyone can prepare for. But it is necessary sometimes to be challenged and jolted into realities. As one of the ex-prisoners Dr Petr Zenkl says people “must see the unvarnished truth”.

Unlike mainstream films like Schindler’s List (1993) which can shy away from the brutalities. Documentaries like this and Alan Resnais’ Night and Fog (1956) try to confront the ‘monstrous brutalities’ and ‘man’s inhumanity to man’ head on.

The film was initially commissioned by the Ministry of Information and lead by producer Sidney Bernstein, with editors Stewart McAllister and Peter Tanner and writers Colin Wills and Richard Crossman.

The film also had input from Alfred Hitchcock who only went so far, as the extras reveal, to suggest some order for the camps, and the use of long takes so it wouldn’t look like a newsreel. A significant suggestion, however, which makes the film even more disturbing and memorable, as the camera relentlessly lingers on gaunt bodies, and rows and rows of the dead. 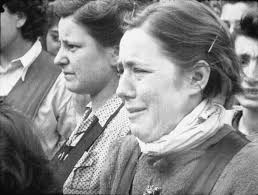 The film for Bernstein was meant to be a reminder of the horrors of the Nazis to Germans who may drift back into fascism, and to pre-empt any denial that about what really happened, a prescient prediction. However, to Bernstein’s eternal regret, it was shelved as it was deemed too horrific to show at a time when they were trying to reconcile with the Germans. It is only now on the anniversary of the liberation of Bergen- Belsen on 15 April 1945, and after being the subject of Night Will Fall (2014) that the film is released on DVD, fully restored.

As the intro and outro explain it is a document of a time. As such it is incorrect in some figures (1.1 million died in Auschwitz not 4 million for example), and in trying to evade the fact that Jews were the biggest victims. As director Dr Toby Haggith explains, this was a time when there was still a lot of anti-Semitism in Europe.

Aside from this, the film is powerful and effective in Bernstein’s aim to document to the “nth degree” the atrocities. Images burn the retina and cannot be unseen, surreal in their ghastliness as Bosch’s visions of hell. The film starts with bucolic fields, cows and villagers giving way swiftly to piles and piles of skeletal bodies that fill nearby pits.

Then there are jarring close-ups of the terrified expressions of the dead, the sullen SS dragging endless corpses 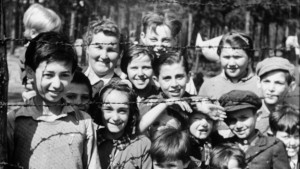 into those pits like they were mannequins or animals (one clinging as if alive), while ex-prisoners hurl them with abuse. The awkward stiff town officials being shown the bodies. The peep holes in the gas chambers, the charred bodies in the deadly efficient ovens.

The piles of spectacles, suitcases, clothing and suitcases with stickers of past holidays and better times. The skeletal, shaken ex-prisoner standing pale, naked, bewildered in front of a Soviet soldier. The rows of bony legs framed against barbed wire.

It can get intolerable. But the film also tempers this by showing the liberated prisoners not just as victims, but as people wanting to live and regain their identities. Women are shown fussily and happily picking out clothes and showering with hot water for the first time since liberation.

All these images you cannot forget, neither can you forget Crossman’s damning words with nuanced, steady narration by actor Jasper Britton, at turns poetic, mocking and dry. Here beyond the barbed wire is nothing “but death and dirt” we are told, whilst the unrepentant SS “mostly remained silent”. And uncaring Germans profit from the camp’s supply of “cheap labour”.

It is a very difficult sleep-disturbing film, not for everyone, but it’s one that can make you gain gratitude for life, and have awe again for the faith and perseverance of people. And as the film says: “Unless we learn the lessons these pictures teach, night will fall. But by God’s grace we who live will learn.” It is a devastating lesson we still desperately need to learn whilst atrocities still happen. We can no longer afford or excuse denial.

Extras include an insightful panel discussion at the BFI Southbank and 80-page booklet giving more context and opinions on the film’s significance and testimonial extras which help to personalise the prisoner’s stories.