On Thursday, March 22nd at the Roxy Bar and Screen, Filmbar70 presen an evening where the act of painting proves to be a very dangerous art indeed as we unveil ‘The Secret of Dorian Gray’, a pinnacle of ’70s cinematic style, and the short ‘The Image’, which features an aspiring young chap named David Bowie in his first screen appearance. For a suitably decadent dessert, Filmbar joins forces with Eldiabolik and his World of Psychotronic Soundtracks to bring you rampant psychedelic visuals and vinyl invigorations with a ‘Psychotronic party’ guaranteed to get your soul a-spinning and your soles a-shuffling.

Directed by British genre vet Michael Armstrong, ‘The Image’ (’67) tells of a painter confronted by his creation, the ethereal David Bowie. With its stark monochromatic photography, disorientating editing and avant-fuelled soundtrack, ‘The Image’ occupies those disconcerting hinterlands that lie somewhere between Roman Polanski and Kenneth Anger, and has the honour of being the first short film to be rewarded with an X certificate. 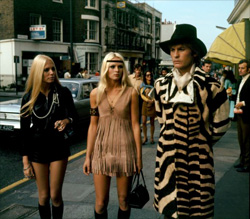 Oscar Wilde’s classic tale of corruption gets a swinging makeover with ‘The Secret of Dorian Gray’ (’70), a pan-euro production that splashes the celluloid canvas with all manner of psychedelic, gloriously hip and sexy shenanigans. The impossibly handsome Helmut Berger is cast to perfection as the titular hero undergoing an ascent into celebrity / descent into depravity as his portrait withers into a grotesque parody. Produced by the esteemed Harry Alan Towers, directed by Massimo ‘What Have They Done to Your Daughters’ Dallamano, ‘Dorian’ draws from a wealth of European talent including Wolverhampton wonder Margaret Lee, Swedish nymphet Marie Liljedahl and Czech genre stalwart Herbert Lom. Pushing the limits of the permissible, this super stylish re-telling is adorned with some of the most outré fashions of the era, pulses with a psych-lounge-rock soundtrack and revels in the perverse and the erotic whilst ensuring all the Wildean witticisms are relevant to our youth and beauty obsessed age.

Finally, Mr Eldiabolik unleashes his World of Psychotronic Soundtracks upon the Roxy to get you up and bounding with wild abandon, all vinyl and all accompanied with specially prepared Filmbar visuals.

So, get your oils out and get ready to paint a masterpiece as Filmbar takes you far beyond colour theory. Art class was never this sexy…

Thanks to our friends at The Roxy, we have a pair of tickets to give away.

To count yourself with a chance of winning, join us on facebook then just send us an email with your name, contact details and the answer to this simple question:

Which of these films did not star David Bowie?
a) Performance
b) The Man Who Fell to Earth
c) Labyrinth