Win The Tunnel on DVD 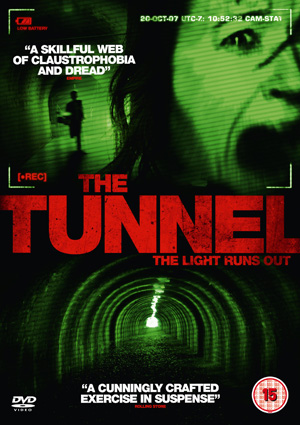 They went down into the tunnels looking for a story – until the story found them.

Starring Bel Deliá, Andy Rodoreda, Steve Davis, and Luke Arnold. The Tunnel is the brand new Australian found-¬‐footage thriller where a terrifying fear is about to be unleashed. The Tunnel is out on DVD in the UK from 6th August.

When heading into a tunnel you know you will see daylight on the other side, but the government abandoned train tunnels under Sydney are a dark, twisted maze, where the shadows move and something is watching…

The Tunnel has been recognised by Variety as “Taking a chapter from “The Blair Witch Project” and a page from 1973 cult item “Raw Meat,”; while HorrorAsylum described The Tunnel as “Terrifying and effective”.

Set for release on DVD in the UK on 6th August, The Tunnel is an edge of the seat thriller, a highlight in the found-footage genre.

We have 2 copies to give away!

Who directed The Tunnel?