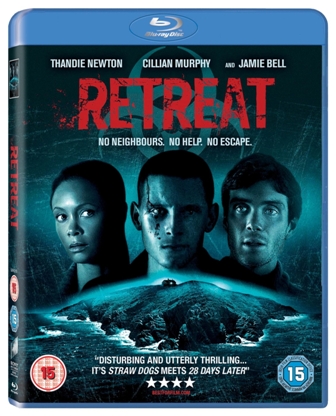 Just in time for Halloween we’ve got a great giveaway for you lucky Front Row Reviews readers. Here’s your chance to win one of three Blu-ray copies of Retreat courtesy of Sony Picture Home Entertainment.

Taking an isolated break on an uninhabited island Martin (Murphy) and Kate (Newton) are about to find that their island retreat is about to become a stone prison of unimaginable terror. When a blood soaked stranger (Bell), stumbles through their door with an apocalyptic story of a virus sweeping across Europe decimating all in its path, their lives are turned upside down as they face the end of everything they know. Using all means necessary, they must fight to escape the approaching threat. But escape is only the beginning of their terrifying fight for survival…

In a series of tense twists, the captive couple are forced to use their ingenuity to outwit the equally volatile and charismatic Jack in an attempt to unravel the real truth.  Loyalties divide and merge and paranoia sets in, culminating in a violent and shocking conclusion.

To be in with a chance of winning this fab prize simply answer the following question. In which film did Retreat star Jamie Bell receive his breakout performance?

a) Good Will Hunting

If you think you know just email you answer to alex@frontrowreviews.co.uk! Good luck!

Discover more about Retreat at http://www.facebook.com/#!/RetreatMovie