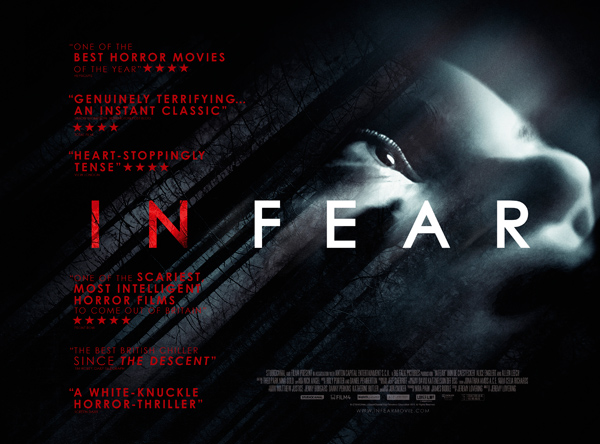 “In Jeremy Lovering’s chilling debut, a young couple fights to survive one nightturned-nightmare. Driving to a music festival, Tom and Lucy have plans to stay at acountryside hotel. But with hotel signs leading them in circles and darkness falling, they soon become lost in a maze of country roads… and the target of an unknown tormentor. Reminiscent of vintage psychological thrillers and bolstered by newcomers Iain De Caestecker and Alice Englert in its main roles, In Fear plays out in real time and hinges on a claustrophobic, unrelentingly tense visual style. Looking to shed pretense and genuinely scare his actors, Lovering withheld the script and often concealed what was about to happen to them. Add a dark forest, and the fear became real. Though propelled by visceral thrills, the film transcends genre and offers a study in fear itself, creating a cerebral fable in which fear – of the dark, of the unknown, of ourselves – governs our nature, compels our choices, and may well seal Tom and Lucy’s fate.” John Nein – Sundance Film Festival.

To be released in UK cinemas on 15 November, In Fear is Jeremy Lovering’s first feature and is produced by Nira Park with James Biddle through her award-winning UK production company Big Talk. Nira has produced all of Edgar Wright’s filmsincluding The World’s End, as well as Joe Cornish’s Attack The Block, Greg Mottola’s Paul and Ben Wheatley’s Sightseers.

We have 3 lovely signed posters to give away!!

Who is the director of In Fear?