Win Curse of Chucky on DVD 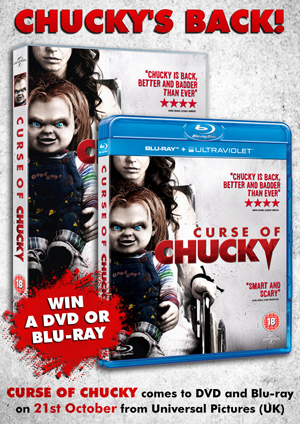 Terror returns in a deceptively tiny package when Curse of Chucky, the newest installment of the chilling Child’s Play franchise, comes exclusively to Blu-Ray™ and DVD on 21 October, 2013, from Universal Pictures (UK) and Universal 1440 Entertainment, a production entity of Universal Studios Home Entertainment.

Curse of Chucky finds a family imperiled by the murderous doll that launched a generation’s nightmares – determined to finish a job that was started long ago.

To celebrate the release of Curse of Chucky, we have a competition copies to give away!

Curse of Chucky is available from Amazon

What is the name of the murderer who’s sprit possessed Chucky?