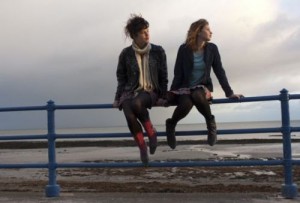 It is a good time for the independent British comedy. Earlier this year both Attack the Block and Submarine earned critical plaudits across the board, each displaying the ability to balance big laughs with a strong emotional core. Niall McCormick’s latest, Albatross looks set to continue the trend, a beautifully observed coming of age story that is sure to produce laughter and tears in equal measure.

Set in a sleepy seaside town, it tells the story of a teenager, Emelia (Jessica Brown Findlay), a school drop out, partier and aspiring writer, who gets a job as a cleaner with the uptight Fisher family and starts up a friendship with their introverted daughter Bethany (Felicity Jones), who is hoping to go to Oxford. She also takes up writing lessons with the father, Jonathan (Sebastian Koch), and an uncomfortable relationship between the two of them develops. It plays out in a rather formulaic manner, and the film contains no real surprises, but the fantastic cast and hilarious script are enough to win even the hardest cynic over.

At the centre of the film is the brilliant, fiery Jessica Brown Findlay, in her first role in a feature film (she has previously appeared in TV’s Downton Abbey). Crucially she shows the brokenness behind the the bravado, giving the scenes with her grandparents a huge emotional impact. It’s an electric performance, and in spite of Emelia’s evident flaws, it is immensely difficult not to like her as a character. Surrounding her are a clutch of equally strong turns, most notably Julia Ormond as the stressed and forgotten mother, imbuing the role with an essential sympathy when she could have just been shrewish.

Warm, winning and very funny, Albatross is a resounding success that benefits greatly from a screenplay that moves between funny and heartbreaking seamlessly. Tamzin Rafn wrote it on weekends over the course of three months, working full time during the weeks. Such dedication and heart for the film really shines on the big screen, and in a world dominated by glossy yet soulless blockbusters, this small film is a diamond in the rough. It may not be perfect, but as you laugh and cry at all it has to offer, you probably won’t care.

It may not get a particularly wide release, so do your best to seek this film out. British Independent Cinema is thriving at the moment, and this is playing just a small part in this renaissance. It’s out in cinemas on October 14th.