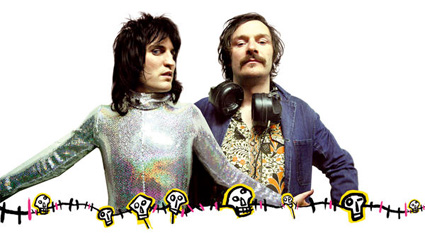 The Boosh have come a long way from their debuts on late night BBC3. After the recent airing of The Mighty Boosh series 3, they have embarked on another live tour around the UK. This time known as The Future Sailors Tour. The name taken from one of the songs from an episode. See below!

It is in my opinion impossible to resist the charm of the 2 main characters, Vince Noir and Howard Moon. The notable others, Naboo, Bollo and Bob Fossil are of course all integral to its success as well.

The Mighty Boosh tour first began after series 2 and nobody could believe its massive impact, which is probably why they have now done another one… they know when they are onto a good thing!

Seeing them live is an amazing night out but watching the live DVD is the next best thing. In this adventure we set sail into the future aboard HMS Boosh into the electro future. Its hard to describe the sort of madness that they come up. Expect classic comedy lines such as; ‘That’s not a moustache, it’s a Bovril smudge’, and the normal banter that the very loyal Boosh fans have come to expect. There are good moments of audience interaction and even the Moon makes an appearance. Genius!

The Boosh certainly are mighty and its no surprise they have now spawned a great range of Mighty Boosh merchandise as well. Take a look at the Howard Moon & Bollo figurines… classic! Although i’m not too sure what adults are supposed to do with children’s toys?

Next tour – do your best to get some tickets, you won’t be disappointed.