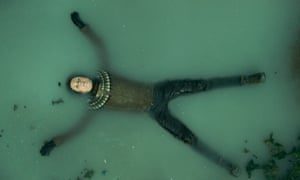 Now you can clearly see the inspiration for WOMAN AT WAR as it plays out on screen. From directors like Sweden’s Roy Andersson to Finland’s Aki Kaurismaki. It playful with sardonic notches. Halla ( Halldóra Geirharðsdóttir) is an environmental activist. She is also on a crusade. Many targets are in her bows sights, be in multinationals, China or a local smelting plant in Iceland. She starts by blowing power supplys and moves up to bolder acts of subversion. When however she is granted permission to adopt a girl from the Ukraine, her life choices are about to come into sharp focus. 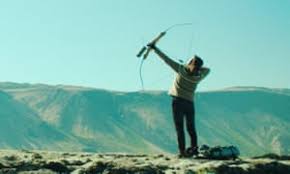 WOMAN AT WAR certainly feels like it has a lot to offer. The viewer is visually driven around the Icelandic rolls and glaciers. You are also  driven to ask yourself a number of questions, albeit in casual and irreverent ways.  Alongside this, you are asked to leap. Halldóra Geirharðsdóttir Halla is also driven to make leaps. From this, is crafted a subtle conversation on the poison infecting our planet.  Not multinationalism but personal isolation, Not globalisation but radicalisation. Another pertinent idea is the depiction of varied womanhood.

This is increasingly coming under focus and rightly so. Woman can be (like men) myriad agents emotional, dynamically and personally. It is in this conception of adoption and motherhood that you see it extrapolated in clever detail. A fragility of the role is exposed and it is done so cleverly. So it never shifts the focus away from this and well done to it for this. 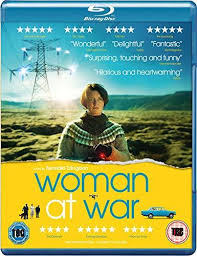 Finally the use of diegetic music is awesome. It diffused throughout the film the sardonic notes which I suspect are as much an homage as a reflection of the psychological state of the lead actor. Which in the end is what life is all about. Sardonic and satirical delights, rupturing are world and we have no way of changing it…