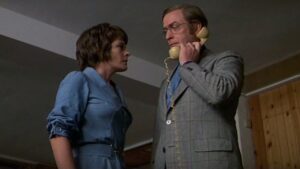 Don Siegel was a well known and well respected film maker. He made tough, uncompromising films about men. His best were spawned in the early 70s and featured Eastwood, Matthau and Wayne as toughened men fighting a corrupt system. THE BLACK WINDMILL sits in-between these films in a complementary and slightly esoteric way. Its not a mob drama, cop fighter or cowboy film, it is, like all those others before it, much more about genre dissolving.

Major John Tarrant (Michael Caine) son is kidnapped and those who have him want uncut diamonds to pay for his release. Tarrant quest is complicated by him working for the secret service and it appearing someone on the inside has information that is benefitting the kidnappers and framing Tarrant. 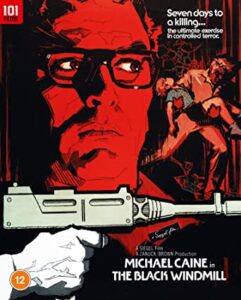 The Black Windmill is a spy film that could be imagined as a Bond film for the darker early seventies audience. As with DIRTY HARRY, CHARLIE VARRICK and THE SHOOTIST, this is a revision of the genre. Injecting blackened bodies and suspicious motives outside of a good guy on a mission framework. Michael Caine is restrained as a British secret agent aware of his number being up. Don Siegel chose wisely. He also chose to restrain the films villians, making John Vernon (who appeared in DIRTY HARRY) slimy and sleazy, without making him less evil. 101 Films have done this film and Siegel, a major service by respecting this film enough to release it. The extras denote some hesitation in viewership but the film is solid and will reward repeat watches!