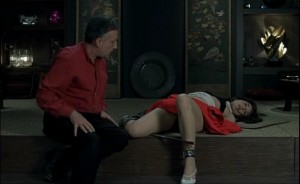 Catherine Breillat’s Romance is an intellectual and pressing study of female sexuality, femininity, eroticism and passion, which has such urgency that it can drive you to the edge. Delicate looking, Marie (a brilliant Caroline Ducey) craves to be touched by her handsome and toned boyfriend, Paul (Sagamore Stévenin), a model who seems far more interested in watching the hard bodies on television than touching any in reality. The opening shots of the film see Marie watching Paul during a photo shoot where has been made up to look beautiful; this voyeuristic feel that Breillat initially introduces helps to create a great sense of tension, which we know is powered by sex. Laura Mulvey would go mad for these opening shots; focusing on specific parts of the face, viewing the minute as a whole.

Paul explains to Marie that he is surprised their sexual relationship has lasted as long as it has because he quickly grows tired of previous lovers, but she should be pleased they have lasted so long. He muses that he expected her to leave him or for their sex life to have dried up long before and he questions why it hasn’t until now. Marie quickly feels under attack and explains she could have cheated on him, which of course she hasn’t. But then a confrontational scene in the bedroom, where Marie is trying to touch her boyfriend intimately despite him expressing no interest, leaves Marie frustrated and underwhelmed and in search of some sexual fountain elsewhere.

Over the course of the film, Marie starts sexual relationships with a man she met in a bar, Paolo (Rocco Siffredi) and then her 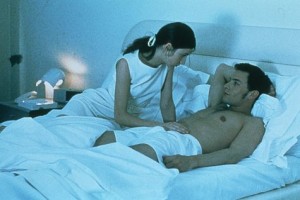 boss at work, Robert (François Berléand). Her sexual relationships with thes men are chances for her to form her own sense of sexual self as she discovers at what point she can cease to have control. Her sex with Paolo is neither passionate nor animal, but she lays flat and he pounds away in a senseless and frankly rude manner. But this is what she wants; during a narration she explains she wants to just be a hole and she cares very little about what goes inside. The reason she ends with Paolo is because she started to find herself caring.

During the day, Marie is a school teacher and there is a wonderful juxtaposition that Breillat quickly introduces between innocence and deviance; she is playing with one of the most famous dichotomies in character study, which pits the innocent virgin with the devilish whore. Whilst wildly debated in cinema, song and writing, this version of a woman still exists on screen and whether Breillat is looking ironically with an all seeing eye or simply because this is what fits the story, is left to be debated. Marie wears fair and neutral colours for the most part, which sees her fade into the background often, especially in her white flat where she spends a frustrated and sexless time with Paul.

Yet, when she starts a sexual discovery with her boss, Robert, she finds herself wearing striking colours like red and black, which often connote danger or sex. She starts to move differently and talks with more urgency; this sadomasochistic relationship is determined to push her to the edge. During their first encounter, he ties her up and she starts to cry. This intense moment acts like a type of break in the scene, just prior to climax and allows the audience to breath out as well. Their next encounter is littered in humour as Robert searches through his hidden chest of sex toys and deviant devices to find what he is looking for as if it was a toolkit. Marie waits patiently to finds herself being twisted physically; whether this is doing anything for her leaves much to be imagined.

In a career known for embracing sexuality and pushing to extremes, Breillat’s Romance is somehow maniacally beautiful, controversial and yet in today’s climate was a gateway for films like Nymphomaniac to be made. A great character study in sexuality and sexual independence.