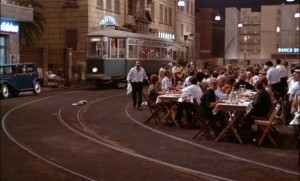 If you’re the kind of person who needs a beginning, middle, and end in your films then I’d suggest you stop reading now. Fellini doesn’t make those sorts offilms and Federico Fellini’s ROMA is no exception. This wonderful piece of work is a semi-autobiographical film-poem, which is in parts bizarre, funny and moving.

The closest you get to a narrative through-line begins in the first half hour, in which we are presented with a young man named Fellini who leaves the little town of Rimini and begins his new life in the city. The young man moves into a boarding house packed to the brim with lively characters (think the boarding house in Delicatessen or the apartment block in Hey Arnold) who are all marvelously depicted by the film-maker. This is followed by an incredibly pleasing scene in which he dines with his neighbors in a great outdoor feast, the summer heat mingling with the city noises and boisterous diners. Though we catch up with this character a few more times during the film (including during a trip to a brothel), most of the rest of of the movie is made up of a series of unconnected episodes that are more about the city itself and it’s permanently fluctuating state.

The city’s past and present, art and religion, moments significant cultural and historical importance, all abound in this searing and joyfully wild portrait. At times the cinematography gives it an almost documentary-like aesthetic, at other times the temporal jumps (Fellini shifts between modern day Rome, the years of WW2, and some years before) and episodic nature gives it the feel of an essay-film; but it retrospect it is clear that the best description would be a cinematic stream-of-consciousness. Though this has been a point of criticism for some, I personally feel Fellini is at his most exciting when communicating via free association.

Following the opening there is a brief interlude featuring a prostitute standing amid ruins, looking weary and hopeless. It is a brilliantly poetic 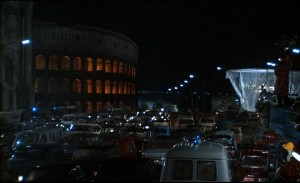 image that imprints itself into one’s mind and evokes a poignancy that remains for the rest of the film. This is really what makes the film great: the countless unforgettable images that the director creates.He takes us to present day Rome and captures an utterly vicious traffic jam (even more effective than the one that opens Fellini’s8 1/2 or the centre-piece of Godard’s Weekend). After the communal camaraderie of the first part this is a bleak and oppressive scene, full of thuggish shouts, black smoke, hammering rain, hitchhikers, animals, flames, gunshots, protests, riot police, and (importantly) a film crew attempting to film the whole thing. This climaxes with a crane shot of all the traffic backed up around the Colosseum – Fellini here demonstrating not only how immersive cinema can be, but how meaningful too.It is arguable that ROMA is a mere indulgence for Fellini, an excuse for him to show off his perfectly judged construction and execution of individual scenes. But why this should be a criticism, I cannot fathom – every scene in this film is such a pleasure to watch. The sequence in which a mining crew come across some pristinely preserved frescoes only for them to turn to ash when the fresh air hits them is one example, or a short sequence showing a congregation of young hippies lounging by a fountain. Perhaps the films most memorable moments come with the aforementioned young man’s first trip to a brothel which almost has the feel of a circus or mental asylum, and his second: a contrastedly swanky affair, which ends with a deceptively emotional interview with a prostitute.Perhaps it is due to my recent re-watching of Sorrentino’s masterpiece The Great Beauty (with which there are many parallels to be drawn) but Federico Fellini’s ROMA feels like an utterly vital part of the film-maker’s canon. It is a work of art – a film of power and beauty.