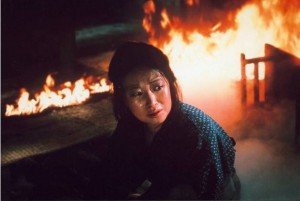 Nagisa Ôshima, director of the controversial ‘In the Realm of the Senses’, tells the story of Toyoji and Seki and their passionate love affair which ultimately destroys their lives. Set in a Japanese village during the late 1800s, Seki begins having an affair with Toyoji; a lively man over twenty years her junior. Toyoji’s jealously of her husband eventually overcomes him and he insists that the husband must be killed. After successfully strangling him and dumping his body in an old well, the two lovers meet in secret for three years. After this period of time the villagers become suspicious of Seki who claims her husband went to Tokyo for work. Another problem arises when her husband’s ghost appears in the village and a determined police officer begins snooping around for clues.

Many of the scenes in Empire of Passion are held together by the effective cinematography – Toyoji dragging the husband’s body through the thick snow, the slow-motion shot of a corpse falling down an old well, the use of mist during the ghost’s appearances – being just a few examples. The use of dramatic irony as the husband gets drunk at home is superb. He trusts the woman he loves who secretly plans to kill him later that night, highlighting his innocence as a character. This arises as a main issue from the viewpoint of a spectator: the characters are all so likeable that while it rooting for the couple it’s difficult to brush aside the husband who is portrayed as an entirely decent character.

The appearance of a ghost alludes to the famous ghost of King Hamlet as flits in and out of scenes. This creates moments which would not feel out of place in J-Horror, with his eerie haunting of Seki. The killing scene itself is well put-together and the innocence of Seki’s husband makes it all the more savage. The cruel words “We have to kill him” resonate throughout the film from that scene onwards and the plotting is presented in quite a sinister way.

Tatsuya Fuji, the star of ‘In the Realm of the Senses’, plays Toyoji – a role somewhat similar to his part in Ôshima’s previous work – but it works well. The child actors are the interesting ones to watch; the effectiveness of a toddler crying on cue always being creditable. Ôshima’s main strength lies in his ability to produce a brilliant ending. Empire of Passion has a haunting, spectacular finale which rounds the film off perfectly. It is really one big metaphor for adultery and the guilt it brings; which is shown in story similar to the traditional Korean pansori tales of love and death.