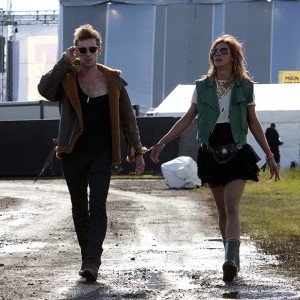 You Instead (David Mackenzie) is a romantic comedy for a generation obsessed with festival culture, and does a good job of encapsulating this despite a fairly predictable and generic structure and some very clichéd moments.

You Instead follows Adam (Luke Treadaway), a young American musician, and Morello (Natalia Tena), an English musician, at the Scottish music festival ‘T in the Park’, initially they dislike each other, until a religious fanatic decides to handcuff them to each other, where over the two days they grow more fond.

The film runs at a short 80 minutes, but it still sticks rigidly to the standard acts of most successful romantic comedies, along with the same stale plot devices to push the story forward, in spite of this the film still produces moments of humour and heart. Character development takes a hit in this film, whilst the characters are likeable they are hollow, a lot of time that could have been spent fleshing out characters is spent in the frustrating sequences of laughter, drinking and walking through the festival to nothing but the soundtrack, this device is used entirely too often, and it decreases the potential for any real character depth. These sequences are not left just too the characters, their are many moments when the film almost becomes an advertisement piece for ‘T in the Park’, lots of shots of crowds, and generic crowd members enjoying themselves, as well as plenty of shots of the high profile performers. This being said two of the characters, Tyko (Matthew Baynton), who is Adams band mate, and the bands agent (Gavin Mitchell) were genuinely brilliant characters played excellently, those two created the better moments of the film.

The films soundtrack is, as expected, one of the strongest elements of the film, using many excellent tracks, both modern and older, most of which were live at ‘T in the Park’, and sound excellent, the cover of ‘Tainted Love’ by the two fictitious bands was particularly memorable.

Despite the film following every rule in the ‘Rom-Com’ rulebook, throughout every act, it is still fun, and a spunky performance by Natalia Tena helps to strengthen this position. If you can overcome its final cliché, fireworks indeed, at 80 minutes, You Instead is a light-hearted affair that is worth its time.