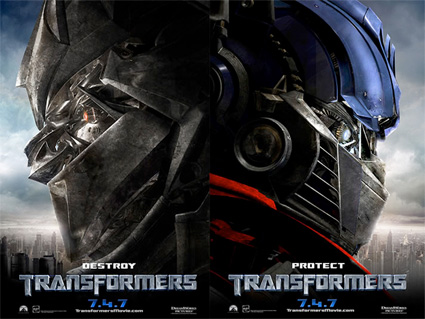 When i first heard about a real Transformers film being made i was very excited at the thought of seeing how they would put it together.

As soon as it was released at the cinema, i was there. I’m happy to say that i left with a massive smile on my face. The action was amazing. From the very first introduction, before the film even started and the Dreamworks logo with the moon appeared and you hear the transformation noise you knew it was going to be good.

The plot is good enough to hold up and the film moves with a really good pace to keep you entertained. The story centres around Sam Witwicky played by Shia LeBeouf, who become entwined wit the battle of the Autobots lead by Optimus Prime and the Decepticons, led by Megatron.

The first scene sees some sort of military installation in a desert, an unkown helicopter flies in to land and will not respond to any calls on the radio. When it lands you get your first look at a robot transforming, and as i already mentioned the sound effects too are perfect. Its so well done and is just a pleasure to watch.

It is directed by Michael Bay, who has carved himself a reputation for great action films including previous successes with ‘Bad Boys I & II’, ‘Armageddon’ and ‘Pearl Harbour’.

There are obviously a few cheesy scenes, but you have to expect that with this type of film. As it has turned out it was still very good and very well received and already spawned a sequel, and i’m sure there will be a few more to follow.