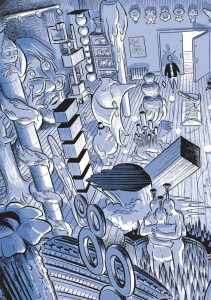 A space...filled to the brim with noise

David Smith is a sculptor that has not had the break he hoped for. Empty and on the edge, he meets with an uncle that has been dead for five years. The uncle is actually death and in a faustian pact of sorts, he is given the power to craft and create at will. The only downside is he has a time limit and that is fixed. His objects of work are everywhere and his inspiration is a woman that he dreamed of. She might well be there for him, his art might not stay around for him. The dreams he has are waking nightmares, hes pieces are confused at first as he comes to terms with his debt. As he grows used to his powers they become magical and potent in one. Will he be able to finish and make it all work with the limit…

McClouds work is well known in the graphic novel world. He is the comic book ambassador, the man that teaches others how to write and how to read comics. With this novel however he seems to have found a new avenue. That of sculptor of ambition and desires within the field. No mean feat for a field with such masters as David Camus or Jason Lutes living in it. McCloud makes a novel that is at first appearance quite dense and overly sentimental. Yet after a second look, this is a novel of power and warmth. It is filled with depth and has so many layers within its excess. The art work is superb and adds also to this depth. The ability to frame a scene, in a way that allows the reader to be in the moment and not pulled out is sublime and McCloud does this well. In reality he does this like a master and needs to be given another novel just for his images. 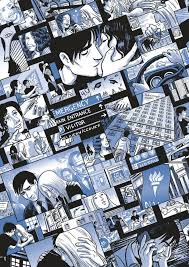 As the song goes, problems I have a few however. I am a humble reader and I was torn about complaining but I have to air this.  Yes it is obvious McCloud wants us all to see his hero as himself. He creates his art because he has to, not in order to get by. This is so simplistic and it is the weak link in this piece. It feels empty on occasion when he gives super powers to an artist. That artist then challenges all and sundry with his works. Art as redemptive, political and sociological piece. Now I corrected myself slightly when I said that, Mccloud was doing what Nolan does within his form. He wants to unbound the creative force and he does this but I felt it was weak.  He also has the problem of having Meg as his wife, she is treated with a lighter touch and sometimes I felt it left her character in a place where she was awful, yet I was told, love her as he does. The other thing which will come up is that the piece does occasionally veer into sentimentality.I liked it when it did that and its ending is both beautiful and touching but some will complain.

This said, I will stand up and say that the book is a must read. It is a must see. It is a must look. McCloud is a great writer of a more complex 90s style soap drama, alternative, indie film style. He has great visual balance and flair. He is also a writer that wants to bring something to a table cluttered. He does.