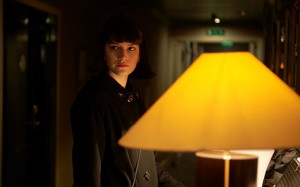 The Ninth Cloud, the latest from Jane Spencer, is possibly best described as a dark existential comedy, which of course is putting several layers of expectation around the film before the audience has even begun to uncover the true meaning. The problem, if one is going to continue with the onion analogy, is that the deeper you dig, the harder it becomes to see anything from tears in your eyes. Okay, so perhaps tears isn’t the right way to describe it but as The Ninth Cloud carries on, the stories, characters and general feeling becomes so multi faceted, asking a lot of the audience that it is very easy to lose your way.

Following Zena (a very watchable Megan Maczko) who is stuck between the identity she currently holds, wondering the streets of London in a sort of daydream state and the identity she believes is out there for her to discover. She has ideologies that could be accused of being outdated and backward but she is sure that if she perseveres with them, they will ring true. Zena has fallen in love with an American director, Bob (Michael Madsen), who she goes around telling people is gay – probably because she has forced herself to believe that he is gay due to his somewhat uninterested response to her. Yet she continues to follow after him and will do whatever she can to impress him and get into his good books. She decides that that if she works to get money for a young child who had lost their leg in war that Bob wants to feature in his play, so that they can get a medical procedure, that may impress Bob just enough to pique his interest.

In a hope to jolt Zena out of her yearning for Bob, her housemate Helene (Sabina Akhmedova) suggests a party where she meets Jonny (Jean-Hugues Anglade), 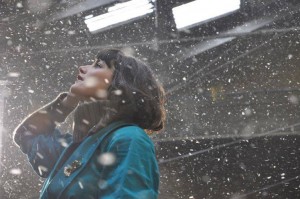 who is perhaps a little too open for his own sake and in turn, puts Zena off. Through Jonny, Zena meets Brett (Leo Gregory), a pompous socialite who is far more interested in beating those close to him for the Humanitarian of the Year award and decides to help Zena by donating money for her cause; the legless child.

Whilst the film does edge towards a kind of fascination that one would only get from a serious indie film like this, shown at a festival like Raindance, it does try its hardest to concern the whole audience with casual provocations of everyday issues and mishaps. It asks big questions and forces the characters in circles and puzzles, trying to figure out their own reasons from existing and doing what they do. Of course, being a serious film of this nature, it also has the potential to lose it’s way, confuse the audience and alienate anyone that may have been able to follow – unfortunately The Ninth Cloud manages to do all three of these things. There is a smattering of further, smaller characters that are all trying to figure out their own paths and whilst they do intertwine with one another and have moments of intelligent humour, it isn’t enough to pull the film through to a conclusion worth caring about.

The best thing about The Ninth Cloud is the fact that Spencer clearly is a highly skilled director and filmmaker, it just seems that this story was not self aware enough with what it was trying to say and instead comes off as unintentional and fluffy. Spencer does bring together a cast of talented actors, who do have great chemistry with one another and the film looks dazzling on the eye, with some especially great sequences that almost edge into being dreamlike but once again, if the story doesn’t fully pull the audience through to the end, unfortunately the audience are already lost.

Clearly a talent to keep an eye on, just hopefully a little more reigned in next time, The Ninth Cloud is worth a watch just to admire being made but perhaps not the memorable film that this group were hoping to make.