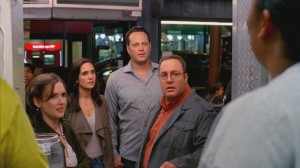 Ronny Valentine (Vince Vaughn) finds out that his best friend, Nick Brennan’s wife (Winona Ryder) is cheating on him. The Dilemma he faces is how to tell him. There are major things he has to consider before he tells him, like the Dodge deal they both are working on, which was “making Brennan bleed from the inside” as he would say. So would you put your best friend in that situation? At the same time because of this secret that’s eating Ronny alive, it’s deteriorating his own relationship with his girlfriend, Beth (Jennifer Connelly).

I really enjoyed this rom-com, personally, out of Vince Vaughns other rom-coms such as The Break Up, even though this isn’t a rom-com as such, it was far more entertaining. It kept a consistant and well paced storyline throughout, and I don’t think there was one so called boring moment, the timing of the film was also perfect, any longer and the audience may have got bored. I think all cinema-goers will take away at least two memorable moments, Ronny’s toast for Beth’s parents, which was hillariously spoken by Vince Vaughn, credit is where credit is due, he made it his own in true Vince Vaughn fashion. The second moment was the speech “Great moments are born…..bla bla”…you’ll get it when you watch it.

The casting was brilliant by Ron Howard, with Kevin James and Vince Vaughn you can’t really go wrong. Kevin James in particular plays really well in roles that consist of pairs. Channing Tatum has a bit part as Geneva’s toy-boy, he does what he had to do, I still think he can’t act. Queen Latifa brings along laughter with her, as the uncomfortable Dodge employee.

I came out of the cinema very satisfied, a feel good ending is what tops it. Definitely worth a watch!