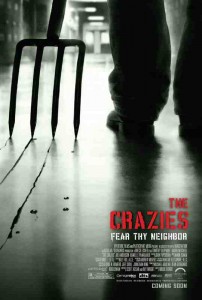 The Crazies is a George Romero horror classic from the 1970’s, and the Hollywood trend to remake his works is this time taken up by an unexpected figure; director Breck Eisner of Sahara fame.

The story is set in the fictional American town of Ogden Marsh. Sheriff David (Olyphant) discovers that an unreported plane crash occurred in the towns marshlands. When residents start to behave very oddly, he is convinced that the drinking water has somehow become contaminated by the plane. The military arrive to try and contain the infection, and things rapidly spiral out of David’s control. The military nickname the infected as the ‘Crazies’ (due to their bizarre symptoms), for whom their contamination policy seems simply to be kill anyone  thats infected. Along with his deputy Russell (Anderson) and wife Judy (Mitchell), David goes on the run to escape Ogden Marsh and its army of crazies.

Whilst the film starts off as a low-spec zombie movie, it takes a dramatic turn when the military arrive, with high budget special effects and explosions galore. This surprise move makes for a very enjoyable, unpredictable, and exciting film. The use of sound and music to build up the tension and atmosphere is very simple but effective. In one scene the protagonists enter a car wash to hide and there are some surprising seat jumping moments when the crazies appear. There are quite a lot of gory killing scenes, but again these never look low quality, with just the right amount of blood used.

Although Olyphant is quite well known for roles in films like Hitman and A Perfect Getaway, he’s not a major star and the rest of the cast are also mostly unrecognisable. That said, they all give solid performances and their anonymity heightens the films frightening sense of realism (the likelihood of a chemical warfare accident is much more realistic than the usual unlikely plague causes in such zombie films). The plot escalates very quickly, without much character development but this comes later and we are soon urging the characters on. One of the good things here is that the film does not try to introduce a ‘new romance’ sub plot, as David and Judy are already married so the film simply concentrates on the infection plot without trying to tie in a formulaic love story as well.

The Crazies has a very similar plot (and some almost identical shots) to another Paramount horror film, Carriers, released last year. It could also be compared to Zombieland as both these films follow an escaping plot trajectory as characters take to the road to escape infection. The Crazies however is much more believable than previous films in the zombie sub genre, and takes a few unexpected turns to make it definitively the best of the bunch so far. A must see for any horror or zombie genre fan.