The Art of Getting By Review | Front Row Reviews
Home
Reviews

The Art of Getting By Review 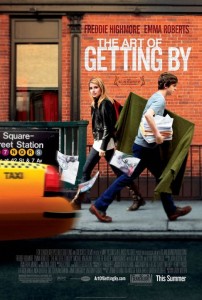 The Art of Getting By is a charming of age drama which follows withdrawn teen George (Freddie Highmore). George is a Woody Allen-esque deep thinker who never really applies himself to any aspect of his life and merely gets by. This soon changes when he meets Sally (Emma Roberts), a beautiful girl at his school who takes an interest in him and their friendship soon blossoms. After problems with Sally, his schoolwork and his parents, George soon learns he must act is he wants to find happiness.

What really separates The Art of Getting By from other recent coming of age comedies how George is a far more intelligent character. It’s extremely refreshing to have a teenage male character whose interests extend beyond just getting drunk and ‘getting laid’ like the boys from The Inbetweeners. He instead wants to become comfortable in his own skin and gain the confidence he needs to pursue his love of art. Freddie Highmore is perfectly charming in the role, and despite playing a very self obsessed character he shows a vulnerability that is easy to sympathise with. Emma Roberts is also well cast as George’s love interest and Red State‘s Michael Angarano plays is the Artist George admires. Roberts has really come along way in the last couple of years and may even emulate her Aunt’s success, stealing the limelight in both this and Scream 4.

Over sentimentality is the only factor that really lets down the film. Although starting off as a quirky comedy like Juno, it soon falls pray to cliche. Any moments of real emotion are ruined by the thudding indie soundtrack which really detracts alot from the performances, and makes several segments seem more like mediocre music videos.

Despite this The Art of Getting By is the perfect antidote for those fed up with teen gross-out comedies, and is a great feel good movie. 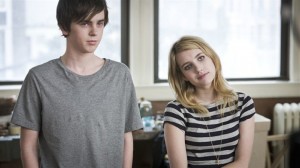