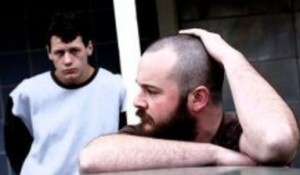 Snowtown (Justin Kurzel) is a harrowing experience from start to finish, it may be an uncomfortable film to watch, but its this which aids its nightmarish feel and makes it a very good film.

When Jamie (Lucas Pittaway), a sixteen year old with a lot of trauma in his life is introduced to John (Daniel Henshall), a charismatic man the two develop a friendship. Jamie’s morality is put into question when he is confronted by John’s true nature, and he is driven further and further by a combination of his loyalty for, and fear of John Bunting. Australia’s most infamous serial killer.

Snowtown is a film which has been constructed to feel like a nightmare. The opening sequence the protaganist, Jamie, narrates a nightmare he has, and whilst traumatic, the film is twice as disturbing as his nightmare. The film was shot on a camera that seems to float through the action, switching between sharp focus and exceptionally soft focus, sometimes both in the same shot, the way the focus changes and the camera floats creates this nightmarish feel, watching the film is like having a horrific day dream. The score aids this feeling, pounding and screeching away, it leaves you as unsettled as the images on the screen. The shooting style is perfectly balanced between getting you in close for moments of emotional imp​act but distancing you at times of horrific violence, yet this distancing makes you feel closer, and more ‘in the situation’, its difficult to accomplish but this film accomplishes it throughout.
The cast does a good job at creating a sense of reality, and whilst the dialogue isn’t fantastic, it serves its purpose, the true excellence in this film is the camera work and the way the story seems to paint John in a major moral grey area.

Overall this film is a harrowing experience but it is still fantastic, and an exceptionally well made film, which will leave you feeling like you have just woken up from one of the worst nightmares you have ever had. Not one for the sensitive viewer, but an important film that should be seen for its craft.