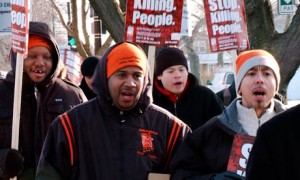 The Interrupters is an excellent, moving documentary concerning CeaseFire, a non-profit violence-intervention organisation peopled by influential men and women whose own violent histories and reputations have garnered for them a street cred that allows them to mediate violent incidents on the streets, primarily to prevent shootings and gun killings.

The film won the Special Jury Award at this year’s Sheffield Doc/Fest and is screening at selected cinemas across the UK as part of the festival’s September-December national tour. Directed by Steve James and co-produced with him by journalist and author Alex Kotlowitz, the film documents a year on the streets of inner-city Chicago, following the attempts of one organisation – CeaseFire – to tackle the ongoing problem of gun violence.

As CeaseFire’s own site quotes, the organisation is a “public health approach to violence prevention”. To those involved, “violence is a learned behavior that can be prevented using disease control methods”; their approach is three-pronged: 1) identification and detection – combining statistical information and street knowledge to identify which areas to concentrate their focus; 2) interruption, intervention and risk reduction – intervening in both individual disputes and group disputes to prevent further escalation of possible violent scenarios; 3) change behaviour and norms – to offer an alternative to the legalist perspectives that view crime prevention with military language (“war on violence”, “war on crime”) by looking at solutions to the epidemic, and by providing tools for conflict resolution to communities for whom violence is an accepted and expected way of resolving dispute.

This last point might recall for viewers The Wire, which as a panoramic television drama provided a critique of the systemic contradictions by which society’s dispossessed were continually failed and driven into cyclical despair, through a punitive justice system demanding top-end careerism and a stats game heightened by a parasitic media.

Though it runs absorbingly for over two hours, The Interrupters is understandably more limited in its scope than that series; its implications for the wider failings of capitalism are more subtextual. While this betrays the film’s obvious limits, it also frees it of the more preachy baggage that might alienate some viewers. To its credit, as a rallying cry for change, its depiction of the human cost of street shootings is recurringly heartbreaking. Indeed, James’s own narrative approach echoes Director of CeaseFire Illinois Tio Hardiman’s reasoning at one point in the film: the important thing in getting to grips with an epidemic is to utilise what resources you can in order to get in and prevent it – it’s only later, after “immersing yourself in the bullshit”, that the theory comes.

The film’s formal limits don’t quite allow for this “theory” to be put forward. How, for instance, are issues of gang culture, gun violence, street crime and youth-on-youth bullying linked to wider questions of economic deprivation, racial oppression and unemployment – all de facto questions of class struggle, of life under capitalism itself? But were the film to commit to a longer running time in order to probe these concerns, it might push its primary focus – CeaseFire – to a more secondary role.

And the film’s strength lies in the way the three personal stories are embedding into its running time. By way of protagonists, three CeaseFire workers provide the documentary with the perspective through which audiences view events: Ameena Matthews, Cobe Williams and Eddie Bocanegra, all of whom have reformed their lives following violent pasts and jailtime. The film documents with great sensitivity both the personal journeys of the three Interrupters themselves, and their individual attempts to connect with people involved in and affected by violence.

Williams – who bears a striking facial resemblance to Wendell Pierce, the actor who played Det. Bunk Moreland in The Wire – balances time between Kenneth and Bud Olive, two brothers whose own mother fears for their lives on a daily basis; “Flamo”, whose inebriated and confused hate risks overflowing into a vengeful shooting at any moment; and young “Lil Mikey” Davis, adamant to turn his life around with a paid job and a heartfelt apology to the barber shop workers he held up – an armed robbery for which he served time. Bocanegra, meanwhile, assists an art teacher in an inner-city school and provides informal counsel to the young pupils there, whose frank confessions of how shootings directly affect them are remarkable, given their age, and deeply tragic.

As Bocanegra’s own unassuming manner and wiry frame evoke, violence of this highly destructive kind is not limited to the visually tough and physically removed, but – like an epidemic – affects everyone regardless of such attributes. This is magnified by the fearless presence of Ameena Matthews, an Interrupter who, as the daughter of former Chicago gang leader Jeff Fort, uses her own reputation to influence other young people to whose volatile predicament she can relate so well, primarily that of young Caprysha Anderson, to whom Ameena acts as patient mentor and sister-like inspiration. 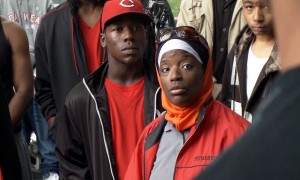 CeaseFire’s employment of people like Matthews, Bocanegra and Williams allows the organisation to go beyond the practical and moral reaches of institutionalised bureaucracy: most of the people with whom Interrupters work “are beyond the reach of traditional social support systems. They have dropped out of school, exhausted social services or aged out, and many have never held a legitimate job; their next encounter with the system is either to be locked up behind bars or laid out in the emergency room.”

As the documentary shows with great, inspiring lucidity, these people – failed increasingly by capitalism itself – are not beyond redemption or help. The emotional devastation felt by these communities is heightened all the more because of the futility that lies behind the shootings that claim people’s lives; and the further vengeance that such shootings catalyse make organisations like CeaseFire inspiring and important.

But the remaining tragedy is that CeaseFire needs to exist at all. And the clarity with which The Interrupters beckons its viewers to mourning human loss is accentuated by the sense of repulsion it invokes towards the violence itself. In the aftermath of riots in the UK and at a time of mass occupations in the US by those tired of gross neglect at the hands of the ruling classes, James and Kotlowitz’s film carries a heightened urgency; now that our attention’s been attained, a follow-up concerning wider implications and a rallying cry for more revolutionary change wouldn’t go amiss.

The October 20 screening of We Are Poets at Newcastle’s Tyneside Cinema was preceded by a short documentary called Eighty Eight. Directed by Seb Feehan and Josh Bramford and produced by Hannah Bone – all of Newport Film School – the short follows 88-year-old widower Ralph Settle as he spends his days playing music on the streets of Cornwall. Shot mostly in close-up and making much use of focus pulls in HD, it’s one of those “character studies” that make a virtue of their subject’s eccentricities, with a vague sentimentality lingering over its eleven minute duration. It won the Student Doc Award at this year’s Sheffield Doc/Fest.