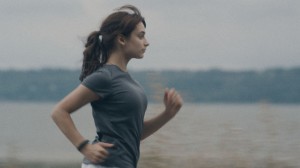 The 57th London Film Festival is mad with coming-of-age dramas, particularly French ones with sexually confused protagonists (a la Blue Is The Warmest Colour). However I’m certainly not complaining – particularly about this quiet drama from French-Canadian filmmaker Chloe Robichaud – with its appealing muted colours, dusky hues and subtle quirks. Sarah Prefers To Run (Sarah Prefere La Course) is indeed about a girl who prefers to run, and prefers it to just about everything and anyone else. Twenty year old Sarah (Sophie Desmarais) is trying to make sense of adulthood and her identity. The only thing she is sure of is that she wants, needs, to run. This is not a typical triumphant sports movie – do not expect to be overwhelmed by the urge to get your squashed trainers out of the cupboard as the credits roll – a feeling that last years Fast Girls may have induced (ahem), the uplifting Brit-flick from Regan Hall. There is no motivating music here. Sarah runs to a delicate violin soundtrack.

Sarah wants to move to Montreal from Quebec to run as a member of the McGill Athletics Team, but her mother (Helene Florent) isn’t too fond of the idea. It isn’t sustainable, won’t put food on the table when Sarah reaches a certain age, “you can’t beat a dead horse” she says. Regardless, Sarah comes to a platonic arrangement with her friend Antoine (Jean-Sebastien Courchesne) whereby he will moves with her, pays the rent and they marry in order to get a government grant. He is also in love with her, which confuses him as she “isn’t even funny, and never smiles.” Sarah is too preoccupied with flushes of lesbian lust for fellow runner Zoey (Genevieve Boivin-Roussy) to return his affections; a relationship that would have done well to be explored in more depth.

Sarah is petite and doe-eyed but her graceful appearance is at odds with her typically masculine stoic, unemotional nature and disregard for anything feminine (about two thirds of the way through there’s a token clichéd moment where she stares blankly at a lipstick in a bathroom before defiantly deciding to apply it.) It’s obvious that Robichaud hasn’t achieved anything drastically unique with Sarah Prefers To Run but that isn’t to say it doesn’t succeed in its own way. Stylistically we have seen all this before. Some may be irritated by the slightly try-hard twee moments, such as the in-between scene insert shots of fortune cookie messages. Sarah is also an opaque character, perhaps too much so for some viewers, but it is the aim for her to be entirely one sided. There’s no real or apparent direction to this pleasingly ambling film. It’s simply a portrait of a one woman’s ambition, hunger and need to achieve crafted a delicate, understated manner. A promising first feature.