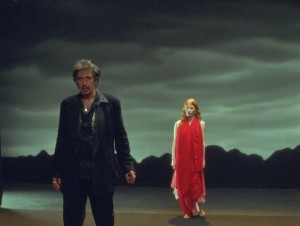 Salome, Al Pacino’s love child with Oscar Wilde is soon to be revealed at the BFI on the 21st September.  Presented by that other lover of Wilde, Stephen Fry, this double bill is directed by and stars the ever enigmatic, Pacino.  This presentation is coupled with a documentary (Wilde Salome) of Pacino’s journey of discovery and process of presenting this sordid but fascinating tale. The documentary brings each decision in the filmmaking process  a fresh perspective as well as beautfiully capturing Pacino’s enchantment with the subject.

Salome, Wilde’s controversial play of 1891, was performed for a limited run at the Wadsworth Theatre in Los Angeles in 2006, and this stage performance is the one represented in Pacino’s movie.  Jessica Chastain (The Help, Zero Dark Thirty) takes on the role of the sultry Salome who seeks to escape stepfather, Herod’s leering advances. Salome is distracted by cries of madness from a pit in which John the Baptist (Kevin Anderson) is held captive. She becomes fascinated with him and demands his company, only to have her advances rebuffed. Soon King Herod (Al Pacino on high pitched and intriguingly chaotic form) enters the fray and declares he will give anything to the beautiful Salome if only she would dance for him.  Salome agrees, only to demand the one thing Herod cannot give – the head of John the Baptist on a silver platter.

The play was initially banned and it’s not hard to see why. Such a display of female lust and sexuality as a central plotline is not something the reverent Victorians would be prepared to accept as entertainment.

is wonderfully wicked in the hands of Jessica Chastain.  Her wild red hair matches her passion in one of the most coveted of modern theatre roles for women.  The madness behind her eyes is beautifully apparent, particularly in close up, through a very simplistic approach without elaborate setting, Pacino achieves a remarkable feat.

Al Pacino is as never seen before, slightly camp, finding tremendous fun in the words he speaks. His much anticipated entrance is greeted excitedly, the 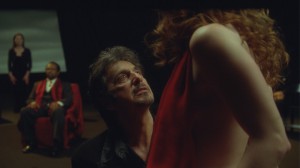 audience knowing and feeling that Pacino is truly relishing this character and having the time of his life (though the documentary declares this as not entirely accurate – performing each night and filming each day has it’s artistic downfalls).  The rawness of his performance is refreshing to behold, and is thoroughly embraced.

Sometimes, we are apprehensive when our favourite performers take on something different.  We might take our seats and feel a little trepidation about what is to follow.  Al Pacino does not lose our trust in this production.  He suprises, amuses and captivates.  He has recently said he will give acting a rest. Mr Pacino, you will be missed. This is wonderful.