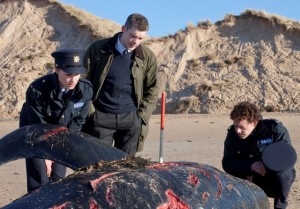 Tentacled aliens land in the sea before coming on shore to suck the blood of an island’s inhabitants. With help from the mainland apparently not forthcoming, the islanders, led by two policemen and a scientist, try to survive the night. This deliciously B-Movie premise is, in and of itself, enough to make this essential viewing, yet Grabbers manages to not only deliver on the promise of the plot but also exceeds these expectations. Not only is it great monster movie, it’s also a brilliant comedy and a great advert for Irish pubs. It also features possibly the best ever way of fending off extra-terrestrials in a film, though that won’t be ruined for you here. Needless to say it’s a whole lot better than using your mac to give their computer systems a virus.

Opening on a boat in the Irish sea, three fisherman notice a bright light crashing into the sea, and wonder if it’s a flare. Needless to say it isn’t, and one or two effective jump scares later, the scene is set for something big and mean to threaten Erin Island. It’s a perfectly atmospheric way to open the film, reminiscent of 80s sci-fi and proving early on that this will be as much about big tentacled monsters as it will be about incompetent policemen. In fact, it takes a while for the comic elements to come into play, getting to know the characters before we begin laughing at them. It’s an important decision, as it means the audience actually cares about each and every one of them when it comes to the climactic showdown.

However, once the central trio of Russell Tovey (hilarious), Richard Coyle (equally so) and Ruth Bradley (the best of the lot) get their alien fighting groove on, it’s a consistently funny film in which leads and supporting characters get equal chances to shine. Whilst the CG monsters are incredibly impressive (especially on a small budget), it’s the characters that leave the greatest impact. And in a film with face-numbing amounts of alcohol and baby worm monsters that suck your blood, that’s really saying something indeed.

Watch it with the biggest, gamest crowd possible after a good beer, and this may well be the best fun you’ll have at the cinema this year. As the Irish say, it’s good craic.