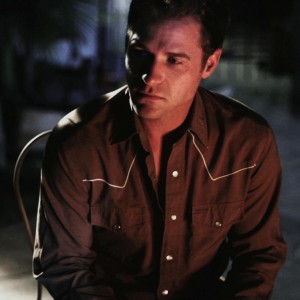 Prevertere is what would happen if you mixed Jim Jarmusch, Richard Linklater and Gregg Araki with a very low budget and the none of the skills to shy away from that fact… plus a sprinkling of James Duval. These don’t necessarily make Brian McGuire’s Prevertere a poor film but rather a film, which should become the precursor to a successful, indie career for a filmmaker much more interested in exploring the inner workings of his characters rather than fleshing out a busy and full narrative. The film calls on all sorts of influences, further than just the ones already named and it suddenly becomes clear that a film such as this, is ultimately a postmodern homage to the genre itself; a psychological journey movie.

The journey that the audience is going on is with Templeton (Terry Wayne) who spends his days going from one lover to another, each playing out a different fantasy and playing a different role with them. All these women together, possibly make the ideal woman for Templeton but unfortunately McGuire doesn’t seem too interested in exploring why he sleeps around with these different women and what he gets from each of them. Rather the film is much more about these integral moments in his life with these women and what they do to him in the now rather than the consequences for the future.

His visit to Las Vegas with on/off girlfriend, Jo-Anne is the most interesting in terms of narrative. With this girl, he truly seems to show emotion. Whilst they are in Vegas, they spend their time at a house party, at first it appears like they are with frat boys but very quickly this changes and men and women of all ages start to appear. It is as if they are lost in time and these moments at the party are all they have left to enjoy, so they simply never leave. This house seems to be filled with the last of the real rock and rollers. James Duval appears (one of the last rock and rollers?), snorting drugs and making barking sounds (not unusual anymore for Duval) and this suddenly illustrates the slight surreal nature of the party. Then Bobby Dino (Bret Roberts) appears and starts to make eyes with Templeton – there is this constant homoeroticism about him, he dances and sings and he stares deeply towards Templeton. At moments he is reminiscent of Frank from David Lynch’s Blue Velvet; seducing the audience with a air of mystery and possible evil ready to explode. He is interested in chatting with Templeton, they have unfinished business and in a slightly more action driven finale, they have a showdown, which is subtle and contemplative.

Along the way, Templeton also spends time with Shelly, an emotional Italian woman who seems to involved in her booty call relationship with 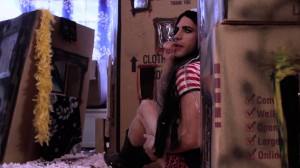 Templeton. Although she says that she understands what they have together, there is also this constant need for attention and emotion that she craves and Templeton just cannot provide that. She leaves him hysterical messages asking to see him and then lashing out if he doesn’t contact her back and this leaves him wanting to create space between the two of them. His final and most mysterious relationship is with Irene (Pollyanna McIntosh) who has promised that they will sleep together once a year for the rest of their lives; she represents the dreamy, the intimate and most aware of what they mean to each other. As they talk and discuss the women that Templeton has been with, she laughs if off and gives him advice not to lead them on. They play in a make believe world, dressing up like princesses and playing in cardboard boxes; this is the childlike side of Templeton, the animal that is screaming to get out and once a year it does.

Woody Allen, David Lynch, Gus Van Sant and those named above all seem to have their look in with this film; McGuire’s filmmaking is exploratory and intimate but it is also very aware of the surface representations of these characters. He is never quite sure whether to create a satire that never breaks the surface or a slightly more alienating look at what it takes to make us, us. The script seems like something written for the Twitter generation, throwing in some Bret Easton Ellis and Hunter S. Thompson just to create the atmosphere. The film never judges the characters but unfortunately it never gives the audience enough to care too much either. 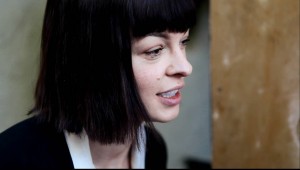 Prevertere is not a hard watch, it is simply demanding you to think but it is never quite sure what it actually wants the audience to think about, therefore leaving them pretty hard done by at the end. There is no consequence for the characters, not really, and despite the mild drama that happens throughout it never leaves the audience wondering what happens next. On the other hand, it is a clever film and perhaps a great introduction to a man with ideas.