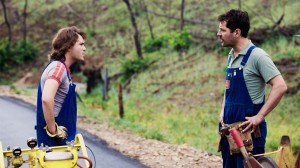 If watching paint dry is your idea of a good time at the cinema, you’ve found the right film in Prince Avalanche. No shade intended – Alvin (Paul Rudd) and Lance (Emile Hirsch) are literally to be found walking up the roads next to the ruins of a Texan forest fire, painting the road markings on with the aid of small, reliable machines. It’s 1988, so fashion is hardly at its peak, but that’s not really the domain of Alvin, a serious soul studying German for his holiday with his girlfriend, nor Lance, said girlfriend’s layabout brother, who could care less about the growing podge of his stomach when he knows he’s the only decent lay in the nearby town.

And so we have the makings of a classic odd couple comedy. David Gordon Green has made an about turn from the mainstream trappings of the (hilarious) Pineapple Express and (not so hilarious) Your Highness, so gone, for the most part, are the ribald humour and manic highs of those colourful comedies. Prince Avalanche grounds itself in a dryer, more ironic sort of humour – “I reap the rewards of solitude,” Alvin says quite seriously, to the rolling eyes of Lance. As a character, Lance taps into both the teenage detachment of the late ‘80s (think Heathers), and the technological malaise of modern youth (Lance does it with a new-fangled wristwatch). It’s a crafty refraction of how society always doubles back on itself, history echoing throughout the present. 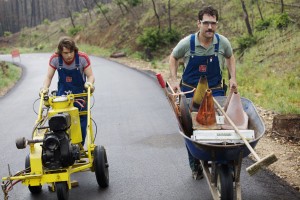 If Lance – a princely name to be sure – is brought back to reality by a physical mistake, it’s a mental one that brings Alvin down, living as he does in his own headspace. His romantic notions and lofty ambitions mean he tries to turn his way of living into a great and noble sacrifice, but ultimately he finds himself more disconnected from the world than Lance. His relative youth is established through the encounters with the only other two cast members: Lance LeGault, as a genial truck driver who thrusts home-brewed gin on the pair, and Joyce Payne, as a lady found wondering the ruins of a burnt-down house. Their familiarity, whether helpful or tragic, with the landscape puts Alvin’s pretensions of independence into context.

The film’s origins in a recent Icelandic film by Hafsteinn Gunnar Sigurðsson may explain the quiet, measured mood of the piece, though Green’s style lends it more jittering energy than is initially promised. Rudd and Hirsch make for an engaging pairing, riffing on each other’s different characteristics to create an unpredictable patter. Sadly, this rarely translates to the actual comedy you feel everyone concerned is reaching for; it’s more gently amiable than anything else, which doesn’t make for the most satisfying of experiences. It scratches a fingernail against the deep strangeness of human beings, but doesn’t find anything to dig into.