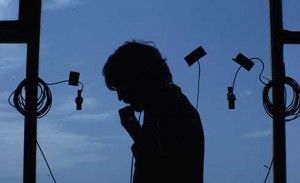 Critically, it might seem too obvious to say that Silence defies categorisation, but it’s an observation that nevertheless affects one’s ongoing evaluation during the film itself. Beginning with lines from John Burnside’s poem “Insomnia in Southern Illinois”, the film seems to drift from one rich, interpretable texture to the next without need for a dramatic or emotional anchor, so that it cues and sustains a number of thematic dichotomies in unique and overlapping ways.

Eoghan (Eoghan Mac Giolla Bhríde) is a Berlin-based sound recordist who takes up a job offer to return to his home on the west coast of Ireland and make recordings of remote places that feature no manmade sound. Bearing a likeness to Sam Waterston’s incarnation of Sydney Schanberg in The Killing Fields (1984), Eoghan’s pursuit of an inimitable aesthetic experience recalls the earlier film’s investigative reportage. Eoghan’s own journey is both topographical and psychogeographic: along the way, he encounters a series of people and collects anecdotes from them, accumulating multiple pasts that contribute to his own understanding of a changed and changing landscape.

The film might have viewed these through a nostalgic filter but for the presence of actual archive imagery, recorded by folklore collectors such as Seamus Ennis and as part of government initiatives to document rural places such as those depicted here. As such, our protagonist – a quiet listener in multiple ways – inherits and continues such documentarian practices, but lies at the heart of a film that does more than merely bear witness. Silence plays on several tensions. To that between documentary and fiction, we may also add stillness/progression, digital/analogue technologies, solitude/intrusion, dwelling/movement, nature/humanity, the past/memory, exile/return, geological time/social history, presence/abandonment.

These themes chime across more material concerns, such as the rural depopulation that has characterised Tory, the island on which Eoghan stays during the film’s latter stages. (“Don’t make roots,” remarks one character whom Eoghan encounters.) They also seem ineluctably bound to notions of time, a link emphasised by the film’s longueurs as well as its contemplative, digestible pace. Denied the kind of historical linearity that might beget nostalgia – here, change is the only constant – we are presented abstract close-ups of deteriorating surfaces such as rundown wallpaper that bears the decay and neglect that constitute it. Cinematographically, meanwhile, the film flattens its landscapes so that Eoghan’s proximity and relationship to them is uncertain. There’s one extraordinary moment in particular, which gives the illusion that Eoghan is much closer to a raging sea than the actor presumably was.

Silence’s title is interpretable. As a soundman, Eoghan is in search of anything but silence, though the film seems headed toward an increasingly interior calm on his part. Challenging preconceptions regarding what constitutes narrative incident, the film not only asks us to listen to its soundtrack, but also teaches us how to do so. At one point, someone reveals that silence is not defined by an absence of planes of even the sound of wind, but by another texture, which is ever-present. In a film that argues that silence is another form of presence, then, it seems fitting that throughout the work, Pat Collins – whose first fiction feature this is – reminds us of an editorial manipulation when he primes an incoming scene with the declarative intrusion of a sound bridge. Collins has referred to Silence as an externalisation of the sense of self-exile he experiences when making films that document locales and people to which or whom he doesn’t necessarily belong, and so the film might also be understood as a self-reflexive expression that asks to be completed by its viewer.

‘Silence’ is part of the London Film Festival’s ‘Journey’ strand, and screens on Thursday 18th and Saturday 20th October.