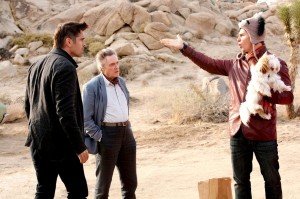 It’s almost as if In Bruges (2008) hadn’t made it clear that Martin McDonagh’s imagination amounts to a casual, self-conscious racism, misogyny and verbal verbosity punctuated by grisly, charmless violence.

Seven Psychopaths is McDonagh’s follow-up to that film and continues its incessant brand of clever, wisecracking comedy. Marty (Colin Farrell) is an Irish alcoholic screenwriter based in LA, who’s struggling with his latest script, “Seven Psychopaths”. Whatever progress Marty makes is stalled when he becomes embroiled in a dog-theft racket concocted by best friend Billy (Sam Rockwell) and Hans (Christopher Walken), who have stolen the beloved canine pet of dim-witted gangster Charlie (Woody Harrelson). As the film develops, Marty draws upon his ideas to influence reality and, likewise, upon unfolding events to inspire his script. The two layers become entwined…

McDonagh is making an industry of non-event. In Bruges was about an impossibly boring town in Belgium that also happened to be a nice plug for the city’s architecture; for its plot, a more violent Waiting for Godot, we had two tourists-with-guns awaiting orders from their foul-mouthed boss. There’s an element here, too, of narrative inertia, and McDonagh works his own apparent writer’s block into what is, conceptually, an inherently self-validating vehicle. Self-reflexivity might be seen here as a defence mechanism, allowing McDonagh to throw any shit he can think of at the wall in the hope, presumably, that the sound of the splatter alone will be funny.

Seven Psychopaths is not without its moments, but for a film whose ongoing focus is writing, it’s a shame these are, for the most part, image-based. In a wordless cameo as an Amish psychopath, Harry Dean Stanton is deadpan-hilarious in the same way ‘Beat’ Takeshi Kitano was in films such as 1989’s Violent Cop (referenced in Seven Psychopaths early on). Christopher Walken, too, leaves his fellow performers in the dust; his is the only acting style here that seems able to deliver dialogue without it sounding like it’s had a very writerly hand behind it.

McDonagh’s continued esteem as a writer, however, is unfortunate and baffling. As talky but not as witty as this year’s other black comedy set in an underworld of folly, Killing Them Softly, Seven Psychopaths churns out risible and offensive gags that render the occasional namedrop (of, for instance, Kieslowski) undeserved. Because the film isn’t set in a sustained, relatable reality, references to “Polacks” and “Niggers” and jokes about AIDS do little to qualify this as a sophisticated or even edgy comedy. Meanwhile, Billy claims that “peace is for queers,” while Hans asserts “dream sequences … are not just for fags. And I don’t think they like to be called fags.” But token bouts of self-consciousness do little to compensate. “Your women characters are awful,” says Hans to Marty, while the latter defends another scene by admitting that one character is “not even a priest, I just liked the image of a Vietnamese guy in a priest’s outfit.” Adolescent and self-absorbed, McDonagh’s dialogue is irritating and forceful, and when Hans says to Marty that psychopaths “get tiresome after a while, don’t they?” you can’t help but mouth, Then why, in all seriousness, are we watching this?

‘Seven Psychopaths’ was part of the London Film Festival’s ‘Official Competition’. It is released in cinemas Friday 7 December.