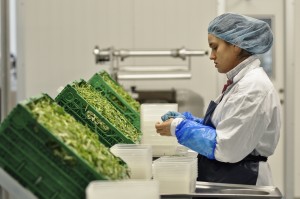 As Raša, the protagonist of Eat Sleep Die (Äta sova dö), Nermina Lukač gives one of the year’s remarkable performances. While Raša has toughened, tomboyish qualities, Lukač has a compelling naturalism, sensitivity and doggedness that recalls the Dardennes’ work, particularly 1999’s Rosetta. Like that film, here the camera scarcely leaves our protagonist, following her like a loyal, curious dog from one day to the next. Eat Sleep Die also moves, however, beyond the narrow individualism of the Dardennes’ work – while it contains their humanism, it also delves into a fuller social fabric with rewarding nuance.

Born in Montenegro, Raša has lived with her dad (Milan Dragisic) in the same rural Swedish town all her life. She takes pride in her inexhaustible contribution to a production line packing salad, a job she has held since she was 16. As well as enjoying a healthy rapport with her dad, she maintains a bond with work colleagues; an early scene portrays her and others appreciating the sound of a Thai co-worker singing a song whose words they don’t understand, but whose feeling they seem to share. Raša’s dad suffers from pain in his knees; denied a sick-note with which he would be able to claim for benefits, he leaves temporarily for work in Norway. Left alone, Raša and others are told they are to be made redundant soon after.

Eat Sleep Die is a sensitive and sincere examination of a young woman whose otherwise contented daily routine is uprooted by the deceptively far-reaching implications of being without a job. Furthermore, through scenes in which its protagonist interacts with others around her, the film takes the human element of unemployment and interweaves it into something suggesting wider, systemic pressures. Informed by a global economic meltdown that has resulted in despair for many, this packs a topical punch in an accessible manner, and should please audiences hoping for a drama in touch with the material realities that many people currently face.

That Raša is an immigrant is significant. Through her, the film seeks to challenge multiple would-be presumptions that younger generations, the unemployed and foreigners are somehow lazy. Eschewing gender politics, the film foregrounds economic threads as the true undercurrent of societal divisions. Raša’s group of friends includes multiple generations and both genders, as well as varied nationalities: what binds them is their wage slavery.

The group attends job-seeking classes, designed to maintain morale in the wake of redundancy and to inject confidence in the pupils. Arbitrary to an extent, such a class can only indirectly contribute to its students’ prolonged spiral into aimlessness and desperation, teaching them as it will the virtues of complying and adjusting to a labour market that has already failed them. Asked to tell the group what they think their transferable skills are, students – untrained in such semantic games – struggle to reflect beyond the trade-specific duties they have grown up with. Raša, for instance, is unable to propose how she might fit into another job, but makes no hesitation in claiming she can weigh 175g of lettuce using only her hands.

In between lessons, Raša visits her old colleagues at the salad-packing plant. In this scene in particular, Lukač demonstrates the range of her acting skills: asking where her personal coffee mug has gone from the communal shelves, she mocks a hurt at her own implied expendability, only to moments later be left in genuine solitude as her ex-co-workers return to work. In neo-realist vein, employment to Raša provides an existence, an identity. She grows ever desperate to retain such traits, and walks to the headquarters of a firm that sells fire extinguishers to ask for a job. The extent of her situation is all the more painful because of how inevitable its outcome appears: happy in her determination and even assisted by others, it is the system itself that poses problems.

The film is the product both of original research and the personal experience of debutante writer-director Gabriela Pichler, whose apparent proximity to events is clear. As much as we’d like, Pichler’s artistic vision presents us with no easy targets, whose comeuppance might present some kind of resolution – not even the boss with whom Raša pleads to retain her job, or the would-be employer who advises her that “fires are prevented by selling people fire extinguishers” (delivered as a subtle dig at the commodification of basic health and safety measures). Indeed, the film’s would-be individualistic vantage point is grounded by a social context that denies exceptionalism: while the camera begins by claustrophobically following Raša as if magnetically attached to her, Pichler’s framing gradually becomes wider. Consequenty, although the film remains Raša’s, we come to also feel something for her community as a whole, as they brave impending hardship with a cathartic tear and many laughs, building to a euphoric celebratory chant that’s mixed into Scooter’s pulsating “J’adore Hardcore”.