Time is valuable, so let’s save you, the reader, some time right now. Do you like musicals? If so, keep reading. If you don’t like musicals, stop reading now. Nothing to see here. You’ll get half an hour into Les Miserables, then start wanting it to end. Then you have two more solid hours of singing. About everything. Singing about revolution, singing about love, singing about death. Everything is sung, and whilst it is all very impressively done, your tolerance for people singing their emotions will be stretched to the point that you will just want everyone to hurry on to their inevitable deaths. Even the most dedicated Les Mis fan will be longing for an interval. So got that? If you don’t like musicals, go and watch, um, Gangster Squad or something, which is out on the same day. This is long, and every inch a musical. However, if you do like musicals, read on, and you can learn a bit about why this is one of the best musicals ever put to film. 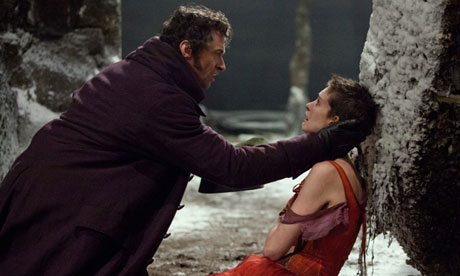 Les Miserables is, by now, part of the public consciousness. Alain Boublil and Claude-Michel Schönberg’s musical adaptation of Victor Hugo’s weighty tome has become one of the iconic institutions on the West End, popularised by anniversary concerts, Susan Boyle and rousing, memorable songs. It’s easy to forget, therefore, that the plot is baffling and complex to the uninitiated: there’s revolution, prostitution and restoration; one man is a convict, a mayor and a philanthropist all in one; for some reason everyone keeps singing. It’s easy to get lost in dense narrative, so a quick précis for the novices may be necessary. The story, at its most basic level, is that of Jean Valjean (Hugh Jackman), a convict who, after experiencing the compassion of a bishop, attempts to reform himself through adopting the illegitimate daughter of a prostitute, Fantine (Anne Hathaway), all whilst constantly fleeing from his nemesis, the law-obsessed policeman Javert (Russell Crowe). There’s also a love triangle, a student uprising in Paris and a comic relief couple of con artists just looking to make some money from it all. It’s a dizzying, decade spanning story, fuelled by a moral and social conscience, as well as by the underlying themes of forgiveness, compassion and reconciliation.

Faced with such a vast, sprawling narrative, director Tom Hooper (also responsible for The King’s Speech) somehow has to make it both accessible and cinematic. Astonishingly, he achieves this. A few key choices affect this success. Firstly, he remains remarkably faithful to the stage play, just rearranging the order of one or two songs to make it flow more naturally, and adding a few lines of dialogue here and there to keep the audience clued up as to what is going on. Also, the much praised decision to have everyone singing live (as opposed to most film musicals, which pre record the songs, then mime) really does pay off, as it gives the actors any number of ways to deliver their lines. It helps to convey the passion, anger and confusion that runs through the lyrics; in short, it makes the singing inherently dramatic. Yet Hooper makes an even more audacious decision with the way he shoots the songs. By choosing to frame the majority of solos in close up, Hooper gives the actors an intimacy with the audience that is not afforded to stage performers. The director understands the power of a person’s face in cinema, and so lets them do most of the talking. Occasionally this means that the look of the film becomes rather dry and repetitive, but when it works, as with Hathaway’s unforgettable rendition of ‘I Dreamed A Dream,’ it works with unrivalled power. It also means that when the camera finally pans out, most notably to scenes of revolution, the wide shots are lent an extra significance; the final scenes are sure to take your breath away. 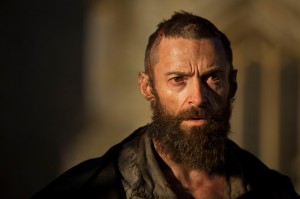 The other result of Hooper’s decision to consistently shoot in close up is that he is fully reliant on the actors and their singing voices to do most of the work. Hooper’s unshowy direction leads some actors to excel, and others noticeably struggle under the pressure. Jean Valjean is a difficult role to play, not only because the actor has to convey a man in constant turmoil and anxiety, but mostly because Boublil and Schönberg wrote his songs with loads of sustained high notes. Hugh Jackman, thankfully, uses his experience on Broadway to great effect and manages really well with the most challenging part to play. Perhaps acknowledging that he doesn’t have the voice of West End stalwarts Alfie Boe and Colm Wilkinson, his approach to playing Valjean is that of an actor, rather than a singer. It means he is a lot less polished and a little more raw, but as he chokes back some notes and almost whispers others, he lends Valjean a dramatic humanity that would be lacking if he just belted the songs out. Russell Crowe seriously suffers in comparison, struggling to capture most of the nuance behind Javert, and forcing out the songs with noticeable discomfort. Just because Javert is famous for being inflexible, this does not mean that Crowe’s voice should be. Elsewhere the cast is uniformly excellent – Sacha Baron Cohen and Helena Bonham Carter just do their usual shtick, but as they are comic relief it kind of works, whilst Eddie Redmayne and Amanda Seyfried achieve the impossible by giving the dullest characters a much needed vitality.

The show stealers, however, are the two actresses given the most iconic songs (both, incidentally, about the pain of rejection). Newcomer Samantha Barks seems like a natural fit for the big screen, confidently playing Eponine as if she has always been acting, and delivering a powerful rendition of ‘On My Own.’ Yet somehow it is all about, and always has been about, Anne Hathaway. She plays Fantine, a woman who has been despised and rejected by the world, and we meet her just as she hits the lowest point of her life. It’s a rather unremittingly miserable role, but in her hands Fantine becomes unforgettably human. Her version of ‘I Dreamed A Dream,’ the song butchered to wild acclaim by Susan Boyle, thrills with emotion, capturing heartache and anger, warmth and sadness. It comes fairly near the start of the film, and whilst there are plenty of rousing songs that follow it, it is her hymn to the fickleness of love and the pain of rejection that you will remember most when the credits have rolled.

With such a talented cast at his command, Hooper creates a musical that is bursting at the seams with emotion. There may be no campy show tunes, no real dance sequences and many of the characters do end up rather deader than when they began, but Les Miserables emerges as one of the most mature, passionate and exciting musicals ever captured on film. Yes, it’s so long it makes you wish they had an interval. Granted, sometimes you wish they cut one or two songs just to speed everything up a little bit. Yet what it achieves is quite incredible: it makes a film full of people singing about their emotions, even as they die, both very human and very believable. It may make for the most gloomy singalong ever, but Les Miserables will also shed tears and stir hearts; in short, it is a remarkable piece of film making.